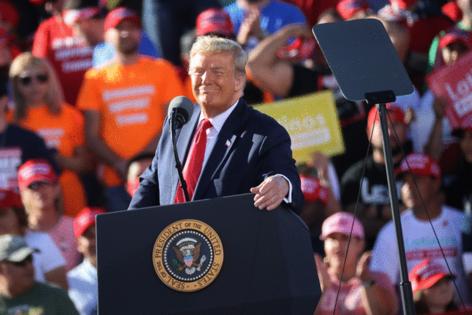 Former President Donald Trump will return Saturday to Arizona, where Republicans are looking to rebound after losing both of the state’s Senate seats in the past two elections.

Unlike candidates in other states with contested Senate GOP primaries, the top four Republicans vying to take on Democratic Sen. Mark Kelly next year are embracing Trump’s policies but aren’t mentioning Trump by name in their early messaging. Their launch videos and websites make little to no mention of the former president, who lost the Grand Canyon State by just 10,000 votes in November.

Some Republicans expect that to change as the jockeying for Trump’s endorsement picks up.

Doing that, however, requires walking a political tightrope. Candidates need to win over enough Trump supporters to secure the GOP nomination without alienating the broader coalition needed to win in November 2022. Arizona Republican strategists largely agree that the broader coalition includes disaffected Republicans who were fed up with Trump’s rhetoric.

Trump’s name was mostly missing from each of the four top candidates’ launch videos and campaign websites. His name briefly flashed on screen during state Attorney General Mark Brnovich’s video as part of a headline noting that Brnovich defended Trump’s immigration policies.

Blake Masters, who runs billionaire Peter Thiel’s investment firm and foundation, mentions the former president once on his campaign website, noting, “And President Trump was right to draw attention to bad trade deals.”

The Senate hopefuls may be treading carefully since Trump has criticized candidates who falsely claimed to have his backing.

“The last thing you want to do is stake your candidacy on being the Trump candidate in the race and watch him endorse somebody else,” one Arizona GOP consultant said.

WASHINGTON — First-term Rep. Teresa Leger Fernandez knows what it takes to sue a state over legislative maps that violate the Voting Rights Act — the New Mexico lawyer has done it.

“These cases could take months on ...Read More

WASHINGTON — The partisan fight over whether the federal government will fund abortion coverage for Medicaid beneficiaries threatens to stall action on major appropriations bills, but the on-the-ground impact would be ...Read More

President Joe Biden dismissed concerns that the U.S. will experience persistent inflation as the economy emerges from the pandemic while cautioning that restaurants and others in the hospitality sector may take longer to ...Read More

WASHINGTON — President Joe Biden is traveling to Ohio for a nationally televised town hall with voters Wednesday evening as maneuvering over his infrastructure plans intensifies on Capitol Hill and the Delta variant ...Read More

WASHINGTON — A sweeping executive order by President Joe Biden aimed at thwarting corporate consolidation and promoting competition in the economy has already spurred business in one sector: K Street.