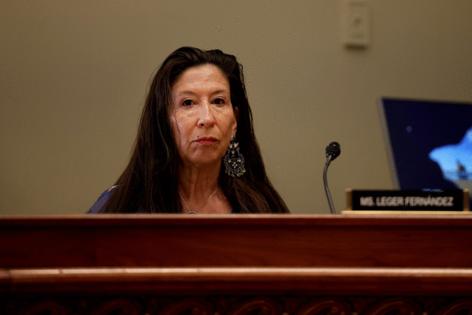 WASHINGTON — First-term Rep. Teresa Leger Fernandez knows what it takes to sue a state over legislative maps that violate the Voting Rights Act — the New Mexico lawyer has done it.

“These cases could take months on a fast-track basis, where you do not sleep, you do not see your children for four months,” Fernandez said.

Before running for Congress in 2020, she represented Native American tribes in her state suing over Voting Rights Act violations in the legislative maps after the 2000 census — which resulted in changes to the maps.

Leger Fernandez is among a handful of House voting rights attorneys-turned-lawmakers helping to write the latest version of Democrats’ Voting Rights Act bill, which include provisions to push back on a swath of changes to election laws state legislatures across the country have passed.

Leger Fernandez and others argue those changes will make it harder for many Democratic-leaning groups, including minority communities, to cast a ballot.

About a dozen legislators on both sides of the aisle — although mostly Democrats — have formal experience with redistricting, as attorneys or state legislators.

The attorneys-turned-legislators working on voting rights issues face an uphill battle to get the changes into law. Last month, the Senate voted 50-50 along party lines on a motion to advance a broad federal election and campaign finance bill, falling short of a required 60-vote threshold.

The measure included new proposed standards on the conduct of elections, such as voting registration requirements, absentee and early voting, and new redistricting standards. With the bill to set new federal standards stalled, attention is now focused on efforts by the House Judiciary and Administration committees to shore up the Voting Rights Act of 1965.

Rep. G.K. Butterfield, D-N.C., an Administration Committee member, said he intends to send the Judiciary panel a set of recommendations to keep the bill on track for introduction this summer. In a June letter to Democrats, Speaker Nancy Pelosi said the bill would not be ready for a vote before the fall.

Butterfield, like several other members involved in drafting the new bill, has a deep history in redistricting and election issues. His father was elected to the Wilson, North Carolina, city council in 1953, a rarity for a Black man in the state at the time. But the city switched from a ward-based council to an at-large system, and his father lost reelection in 1957.

As the federal debt limit brings a disastrous government default ever closer, Congress will turn to the Treasury Department for the one thing it cannot deliver: a precise deadline.

ORLANDO, Fla. — The bill that President Biden sees as the cornerstone of his agenda is facing pushback from an unexpected corner: a group of centrist Democrats that includes U.S. Rep. Stephanie Murphy of Winter Park.