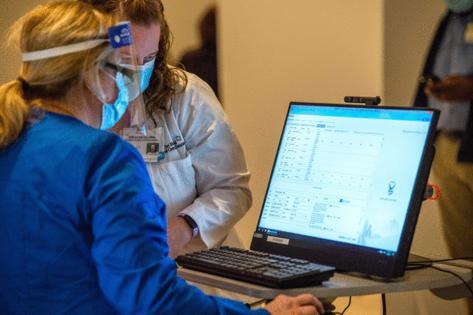 WASHINGTON — A sweeping executive order by President Joe Biden aimed at thwarting corporate consolidation and promoting competition in the economy has already spurred business in one sector: K Street.

Lobbyists have begun to plot campaigns to influence multiple federal departments and agencies as the executive branch embarks on a major, monthslong effort to write or rewrite regulations that could affect businesses’ bottom lines.

The executive order hits K Street clients in agriculture, technology, health care, financial services and even alcoholic beverages. It directs agencies to grapple with increased consolidation in such industries as insurance, health care and agriculture. Biden, for example, has ordered federal agencies to examine hospital consolidation and the costs of drugs and hearing aids.

The administration also wants to make it harder for employers to collude to suppress wages by limiting noncompete clauses and taking other steps.

“If you think this executive order won’t impact you, you’re probably not paying attention,” said lobbyist Francine Friedman of the firm Akin Gump Strauss Hauer & Feld. “Everyone should be looking at how things could be good for them or bad for them.” She added that companies and industries will be on alert for ripple effects — for example, new rules in the agriculture sector may then affect the restaurant industry.

The order sets off a process at a dozen federal agencies, which are expected to begin new rule-makings and reviews, examining how consolidation affects consumers and the prices they pay.

Some of K Street’s biggest spending groups, including the U.S. Chamber of Commerce and the National Association of Manufacturers, say the administration’s new effort on competition has become a top priority.

Neil Bradley, the chamber’s executive vice president and chief policy officer, said his group would focus on how individual agencies carry out the directives and on the bigger picture for business overall.

“There’s also the underlying premise that the entire executive order is based on, and that’s a premise where we think the administration is just wrong,” Bradley said. “The chamber will also be advocating to point out the competition that absolutely does exist and the benefits of that competition.”

He said the chamber sees a dynamic business environment rather than dangerous levels of corporate concentration and argued that “an aggressive regulatory approach will actually stifle competition and stifle innovation.”

The administration, by contrast, sees the economy heading toward a return of the Gilded Age of the late 1800s, a period of monopolies and rising income inequality.

Before signing the order on July 9, Biden offered his view: “What we’ve seen over the past few decades is less competition and more concentration that holds our economy back. We see it in big agriculture and Big Tech and Big Pharma, and the list goes on.”

Given the breadth of the order and that it takes a whole-of-government approach, Bradley said the chamber would undertake a similar “all of chamber” effort that would include messaging work, advocacy on the individual policies that flow from the order and, potentially, litigation.

Chris Netram, vice president of tax and domestic economic policy at the National Association of Manufacturers, said his group too would make the process set out by the order a top priority. NAM’s membership includes companies in the technology, pharmaceutical, energy and industrial sectors.

“It is right up there,” he said of the position of Biden’s order on NAM’s list of priorities. “It really does rise to the top of the issues that the industry is concerned about.”

The order, and the possible new federal rules it may foster, “has the potential to significantly affect the manufacturing economy,” Netram said. “We plan to be engaged in every step.”

Some companies, lobbyists said, see potential opportunities from the executive order, especially if it targets their competitors — bringing long-running market disputes front and center in Washington. The fights over the agency actions will likely pit sectors against each other, as well as individual companies against one another.

“There are always legitimate concerns across industries that no one company gain an unfair competitive advantage over others by consolidation,” said lobbyist Stephanie Silverman, who runs the firm Venn Strategies. But, she added, “it is very easy to overreach if regulators don’t understand the nuances of the industry.”

Silverman said that the order is very broad and that it’s unclear what the agencies will do to implement it. “The question across our client interests is whether regulators will look to implement the policies to restrict what they perceive as anticompetitive interests,” she said.

Friedman, whose firm Akin Gump issued an analysis of the order shortly after the president signed it, said lobbyists are looking at potential “touchpoints” including which officials are designated from each agency to work with the new White House Competition Council that has been created.

Like others on K Street, Friedman also plans to work with lawmakers and staff on Capitol Hill, as another avenue for influencing the process at the agencies. Lobbying groups and companies are also expected to band together around common policy goals.

“I do think you will see either loose coalitions or formal coalitions coalescing around some of the various recommendations,” Friedman said. The executive order, she added, was like pushing the “go” button “and now those agencies are going. But there’s a lot of work to be done.”

PERRY, Ga. — For the first time since a pre-runoff visit in January, former President Donald Trump is returning to Georgia to hold a rally for thousands of supporters. And even though Democrats swept those Jan. 5 runoffs...Read More

So a day before the nation’s most competitive election ...Read More

WASHINGTON — The House Budget Committee on Saturday is set to advance a draft version of President Joe Biden’s signature tax and social spending measure, a milestone ahead of possible votes on the floor of the chamber ...Read More