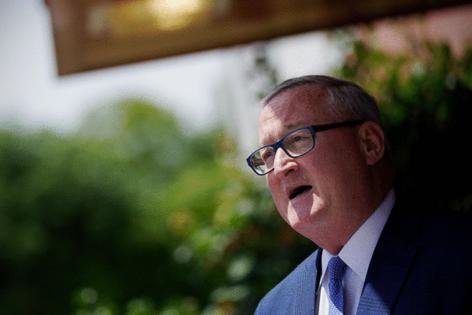 PHILADELPHIA — Mayor Jim Kenney on Monday said he will not declare a state of emergency over the city’s gun violence crisis, writing in a letter that such a move “is not a solution that will demonstrably change conditions in Philadelphia.”

Kenney sent the letter to City Councilmember Jamie Gauthier, who for months has been pushing the administration to declare an emergency and treat gun violence as a public health crisis.

Gauthier called Kenney’s decision “an abdication of responsibility” and “a reflection of just how disconnected the mayor and his administration is from the actual reality that people in our communities are living through every day.”

At the urging of Gauthier, whose West Philadelphia-based district has seen historic levels of shootings this year, the mayor in March began holding weekly news conferences on the city’s efforts to combat the gun violence epidemic, styled after its briefings on the coronavirus pandemic.

Council last year unanimously approved a resolution by Gauthier calling on Kenney to issue an emergency declaration. But the mayor’s letter on Monday made official that he will not be fulfilling Gauthier’s primary request and issuing an emergency declaration similar to the one New York Gov. Andrew Cuomo, a fellow Democrat, has declared for that city’s surge in gun violence.

“Local government leaders across America are doing everything we can within our powers to bring resources, coordination and attention to the epidemic of gun violence that continues to spread like a disease across our nation,” Kenney wrote in his letter, which was obtained by The Inquirer. “Together we must all keep working on solutions to invest in and heal communities hurt by gun violence and resist the temptation to issue statements that will not have the desired impact. I look forward to your continued partnership on this front.”

Gauthier objected to the idea that a disaster declaration would be just for show.

“Obviously I’m not asking just for the declaration of an emergency with no action,” she said in an interview Monday evening. ”I’m asking for us to act like it is an emergency.”

But Kenney said three of the supposed benefits for declaring an emergency — it will unlock new resources, allow for better intergovernmental coordination, and draw additional attention to the crisis — are already happening in Philadelphia. He noted that the city is investing $155 million in anti-violence measures in the new budget, he works closely with other city and state agencies, and he has spoken to Pennsylvania Gov. Tom Wolf and President Joe Biden about the crisis.

Lawmakers and Kenney added $68 million in new anti-violence spending in the budget that began July 1, for a total of $155 million on programs such as violence intervention and aid to neighborhood groups.