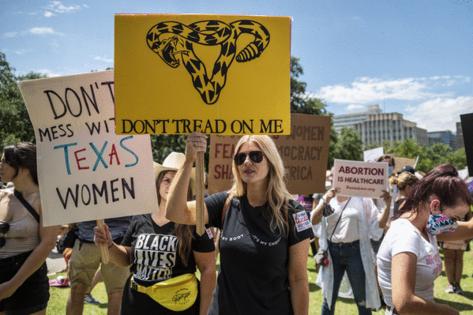 In Texas, a dangerous future looms on the horizon for anyone who values privacy or individual autonomy. Come September, ordinary citizens could be granted the power to monitor and sue their neighbors for violating a new abortion law.

This spring the Texas Legislature passed Senate Bill 8, which prohibits abortion after the detection of a fetal heartbeat, typically around six weeks into pregnancy. An abortion ban that early is completely unconstitutional; Roe vs. Wade and Casey vs. Planned Parenthood established that a woman has the right to an abortion any time prior to fetal viability, which is around 24 weeks of pregnancy.

Women are often not even aware they're pregnant during the first six weeks. But the most chilling aspect of Texas' new ban isn't the flagrant attack on reproductive rights, it's the legal innovation that might just let state lawmakers get away with it.

SB 8 authorizes only private citizens, not the government, to file suit to enforce the law. Any individual who objects to an abortion performed later than six weeks into a pregnancy — it could be the woman's ex-boyfriend, barista, co-worker — can sue any party involved other than the woman herself, whom the law immunizes.

In case Texans aren't motivated to go to court, there's also a $10,000 reward for anyone who wins one of these lawsuits, effectively putting a litigation bounty on the head of abortion providers.

There's plenty of precedent for giving individuals the right to sue to enforce a state or federal law — witness California labor law or most federal environmental statutes. What's different here is that citizens aren't joining government officials in enforcing SB 8, they're being put in the government's place.

The law was designed this way to make it harder to overturn. "They're basically trying to get around federal court review," said Marc Hearron, senior counsel for the Center for Reproductive Rights. "They know this is a blatantly unconstitutional law, and they know that if they had gone the same route as all of the other states, they would have had no chance of success."

Abortion bans have been shut down in other states before they took effect, but this one could be harder to block. Stephen Vladeck, a professor at the University of Texas Austin School of Law, said private enforcement offers a loophole. "This makes it really hard for those who are affected by this law to challenge it," he said, "because it's not clear who you sue when you're protesting a law that the government is not responsible for enforcing."

Despite this hurdle, a group of abortion providers, counselors and others including the Center for Reproductive Rights filed a federal lawsuit targeting the Texas law this week. The defendants in the case include every state court judge and country clerk in Texas, the Texas Medical Board, the state attorney general and the director of Right to Life of East Texas.

The plaintiffs are asking the court to block the law before it takes effect Sept. 1. If they're not successful, SB 8 is likely to have disastrous consequences for the availability of abortion in Texas.