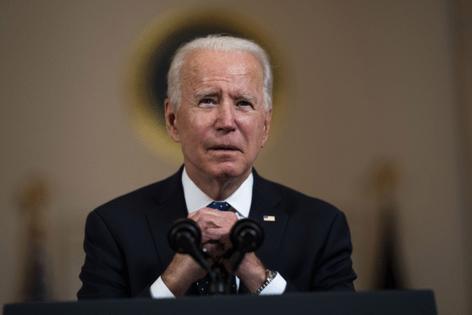 WASHINGTON — President Joe Biden plans to meet with top U.S. financial regulators on Monday to discuss the health of the system they oversee and how his administration’s priorities, including on climate change and inclusion, can best be addressed.

The meeting, which was announced by the White House on Friday night, comes at a critical stage for Biden’s infrastructure proposal and after Federal Reserve officials said this week that they anticipated two interest rate increases by the end of 2023.

White House Press Secretary Jen Psaki said that the president would “meet with lead financial regulators for an update on the state of the country’s financial system and institutions.”

She said the session would “cover regulatory priorities including climate-related financial risk and agency actions to promote financial inclusion and to responsibly increase access to credit.”

Under the Biden administration, Washington’s financial regulatory agencies have been particularly focused on confronting global warming with Democratic officials regularly talking about the issue at events.

The Securities and Exchange Commission, Wall Street’s principal regulator, is working on a new set of rules to force companies to make disclosures related to climate change. At the same time, the Commodity Futures Trading Commission, the chief U.S. derivatives regulator, created a unit to assess that asset class’s role in reducing carbon emissions.

While SEC Chair Gary Gensler took over the regulator in April, other key agencies including the CFTC and the Office of the Comptroller of the Currency have temporary leaders with the White House yet to nominate permanent chiefs.