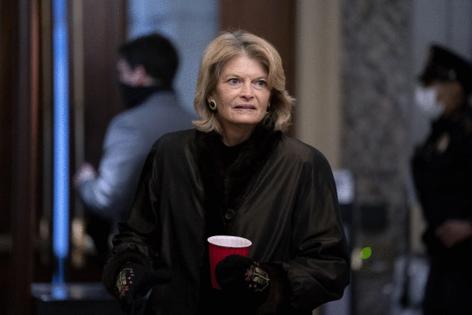 Trump did not mention Murkowski’s vote to convict in his statement backing Tshibaka, the former head of Alaska’s Department of Administration. But Trump’s endorsement comes after he has pledged for months to campaign against Murkowski, who has yet to announce whether she is running for a fourth full term.

“Lisa Murkowski is bad for Alaska. Her vote to confirm Biden’s Interior Secretary was a vote to kill long sought for, and approved, ANWR, and Alaska jobs. Murkowski has got to go!” Trump said in a statement.

Trump carried Alaska by 10 points in 2020, which Tshibaka referenced in her own statement.

“President Trump won Alaska by double digits twice because his leadership and policies made him the best president our state has ever known,” she said. “He knows our Alaska values, knows that we must be free to tap into our vast natural resources, and knows that we ought to be able to chart our own course without constant, authoritarian interference from Washington, D.C.”

A spokesperson for Senate Republicans’ campaign arm did not immediately respond to a request for comment. National Republican Senatorial Committee Chairman Rick Scott has said the committee will back Murkowski, and all GOP incumbents. Murkowski also has the support of Senate Leadership Fund, a super PAC aligned with Senate Minority Leader Mitch McConnell.

Murkowski has said she expects to have challengers from multiple parties, thanks to Alaska’s new ranked-choice system, which voters approved via a ballot initiative last fall. Under the system, candidates from all parties will compete in one primary, and the top four vote-getters will advance to the general election, where voters will rank them in order of preference. The new system could help Murkowski fend off challengers from her own party.

This is the second time Trump has endorsed a Republican challenging a GOP lawmaker who supported his impeachment for his role in inciting the attack on the Capitol on Jan. 6. Later this month, Trump will travel to Ohio to hold a rally supporting Max Miller, who is challenging Rep. Anthony Gonzales.