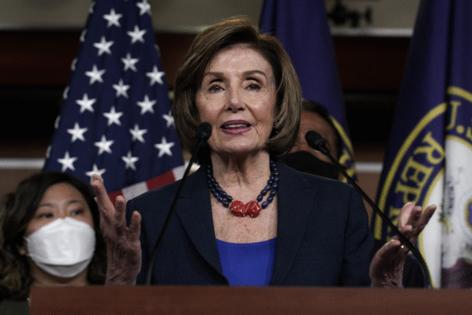 Do they simply raise the statutory debt ceiling to a new, higher dollar figure that could top $30 trillion? Or do they use the maneuver majorities on both sides of the aisle have employed for the past decade and “suspend” the debt limit until some later date, likely after next year’s elections?

Upping the borrowing limit by a specific amount is always a challenge because it puts a political target on the backs of those who vote for higher debt. It may prove even more difficult this year given narrow Democratic majorities in the House and Senate, and projections the debt is on a path to break the post-World War II record as a share of the economy.

Debt limit suspensions are “less open to attack” from the other party, said Shai Akabas, director of economic policy at the Bipartisan Policy Center. That “has historically been a factor for both parties, and I imagine is a component of consideration now,” he said.

Even that method is no slam dunk for party leaders. In 2019, in the last debt limit suspension vote as part of a broader bill to increase discretionary spending caps, 16 Democrats in the House and five in the Senate voted “no.”

Four of the House Democrats were moderates who lost their seats in 2020, and six are on the National Republican Congressional Committee’s target list for 2022: Josh Harder of California, Abigail Spanberger of Virginia, Ron Kind of Wisconsin, Kurt Schrader of Oregon, Stephanie Murphy of Florida and Kathleen Rice of New York. None returned requests for comment.

After Monday night when Rep.-elect Melanie Stansbury, D-N.M., is seated, House Democrats will only have four votes to spare on partisan legislation.

The five Senate Democrats who voted “no” two years ago were Joe Manchin III of West Virginia, Michael Bennet of Colorado, Thomas R. Carper of Delaware, Amy Klobuchar of Minnesota and Jon Tester of Montana. Klobuchar and Bennet at the time were running for president; Bennet is up for reelection next year, though Inside Elections with Nathan L. Gonzales rates his seat “solid Democratic.”

Bennet, Carper and Manchin released statements at the time pointing to an unsustainable U.S. fiscal picture. Bennett voted against a similar law the year before, but all five of those senators consistently voted for debt limit bills during the last decade, with the exception of Manchin in January 2013.

A big selling point of the suspension approach, at least in the House, is that under the chamber’s rules, once a budget resolution is adopted, it automatically spins out to the Senate a debt ceiling suspension measure through the end of the upcoming fiscal year.