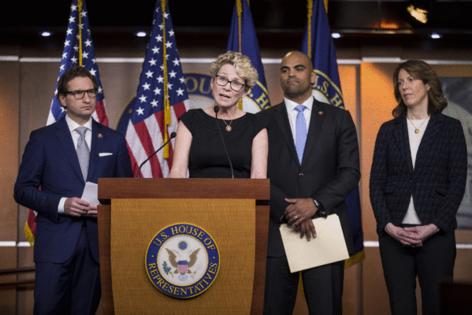 The new caucus will advocate for policies that will encourage U.S. businesses to more broadly share the wealth they create and deploy American ingenuity to tackle the world’s most pressing challenges, said co-founders Dean Phillips of Minnesota and Chrissy Houlahan of Pennsylvania.

“We’ve long emphasized the right of business to make a profit, of course, but not the right of workers to share in those earnings — that success — that they help generate,” Phillips said at a launch event Friday.

“As we look to rebuild our economy in the wake of a very devastating pandemic, we must look to reimagine it,” Houlahan said. “Our environment, our national security, our economy, our health care — they’re all greatly threatened by the inaction that we’ve had on climate change.”

“Stakeholder capitalism” stands somewhere between the socialism that animates much of the left, and the idea of shareholder capitalism that underpins free-market thinking. Most famously espoused by Milton Friedman in a 1970 essay, the shareholder-centric model argues that a corporation’s only duty is to maximize profits for its owners, the stockholders, and that this promotes the efficient allocation of capital that leads economic growth and broad prosperity.

It’s a theory that has justified everything from the rise of private equity corporate raiders to lucrative stock-option-laden executive pay packages, and it mostly went unchallenged in the U.S. until the housing market collapsed in 2007, ushering in the 2008 recession.

Since then, interest in a friendly, gentler, more caring form of capitalism — stakeholder capitalism — has only grown. Rather than focusing just on boosting stockholder returns, the stakeholder-centric model says corporations should also consider what’s best for their workers, their communities and the planet. A similar impulse has fueled the rise of ESG — environmental, social and governance — investing, which by some metrics has grown to describe firms with $103 trillion in assets under management.

While the caucus is brand new, the idea behind it is anything but for Houlahan and Phillips.

Before Congress, Houlahan worked as the chief operating officer of AND1, the sports apparel company best known for its street basketball mixtapes. The company would only work with suppliers who paid their workers living wages, offered its own employees free day care and gave away 10% of its profits to local charities. But when the company sold in 2005, the new buyers ended most of those programs. Soon after, Houlahan’s husband — who was AND1’s president — founded B Lab with some other AND1 executives, and Houlahan came along as the new nonprofit’s COO.

B Lab created and helped popularize the first new corporate legal entity in over 50 years, the benefit corporation. Unlike regular corporations or limited liability companies, B Corps have explicit fiduciary duties to stakeholders. B Corp statutes have been adopted in 35 states, and a number of famous companies have formed or rechartered as B Corps — Ben & Jerry’s, Patagonia, Allbirds and New Belgium Brewing to name a few.