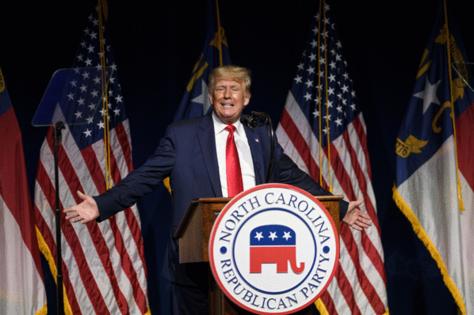 WASHINGTON – Former President Donald Trump’s recent endorsement in the North Carolina Senate race is the latest sign that he is looking to influence primaries in competitive states, in a shift from recent election cycles.

During the 2018 and 2020 elections, Trump often supported Republican incumbents and the eventual GOP nominees in open races. But he rarely took sides in Senate primaries in targeted states. If the North Carolina race is any indication, that’s starting to change as Trump looks to wield his influence over the GOP now that he is out of office and no longer tethered to the party infrastructure.

“He’s looking at a couple of the seats that are very much key to our comeback,” South Carolina Sen. Lindsey Graham, a Trump ally who has discussed Senate races with the former president, said in a brief interview Wednesday. Graham noted Trump could back Herschel Walker if the former football player decides to run for Senate in Georgia.

It may be hard to predict where Trump will weigh in next. On Saturday, he made a surprise announcement that he was endorsing Rep. Ted Budd, one of several GOP candidates in North Carolina’s open Senate race. Trump said he informed Budd about 15 minutes before announcing his pick at the state party convention.

The endorsement also came as Florida Sen. Rick Scott, chairman of Senate Republicans’ campaign arm, has encouraged Trump to hold off on endorsing candidates until after primaries are over.

Trump, however, likely carries more weight than other party leaders when it comes to energizing his core supporters to donate and support his preferred candidates.

“In the only three days since the Trump endorsement, our online donations have doubled what we had done in the previous six weeks,” Budd campaign spokesman Jonathan Felts said. He wouldn’t give dollar figures but said the campaign had been using what he called “unconventional” ways to attract attention during an “aggressive push for low-dollar online folks” since Budd announced he was running.

Felts acknowledged it would take time for Budd to close a gap in name identification and fundraising to catch up with former Gov. Pat McCrory, a rival for the GOP nomination whom he expected would file a sizable fundraising report at the end of the month.