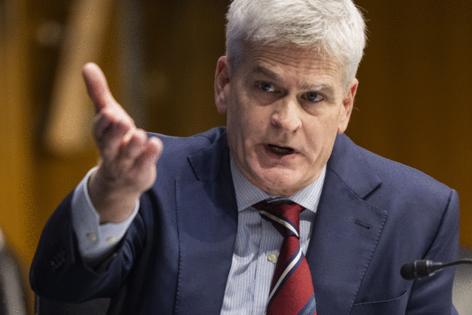 WASHINGTON — Members of a bipartisan Senate group negotiating a fallback infrastructure plan say they will avoid tax increases and user fees, but include climate-related spending, in a bid to get past obstacles that have tripped up progress on a $1 trillion-plus package thus far.

Louisiana Republican Sen. Bill Cassidy said Wednesday that the group of senators he’s negotiating with has a chance to show President Joe Biden there are Democrats willing to eschew partisan proposals in order to get a deal.

The senators have not yet finalized their proposal, including how exactly to pay for it, but they’ve appeared to make some concessions that Biden and a group of Senate Republicans, led by Environment and Public Works ranking member Shelley Moore Capito, of West Virginia were largely unwilling to in their negotiations that ended Tuesday.

The so-called G20 group of senators has kept tax increases off the table to appease the Republican members and is including some climate-related infrastructure spending that Democrats have demanded, multiple senators involved in the talks said Wednesday.

“I think the advantage of the bipartisan group is that frankly that softens the White House line, potentially. And … it may allow Republicans to be a little bit more giving, if you will,” Cassidy said during a virtual BakerHostetler event.

Cassidy has emerged as one of the key senators involved in the bipartisan negotiations, along with Kyrsten Sinema, D-Ariz., Rob Portman, R-Ohio, and Joe Manchin III, D-W.Va. Biden spoke Tuesday with Cassidy, Sinema and Manchin after he ended his negotiations with Capito.

The main difference between the two negotiating groups is that the bipartisan one includes congressional Democrats, whereas Biden was the sole representative for his party in negotiations with Capito’s group.

“This may have more of a chance to demonstrate to the president (provisions) Democrats would accept that he may not have been aware that they would accept,” Cassidy said.

Their 58-member group has released a separate $1.25 trillion infrastructure spending framework, including $761.8 billion in new spending over eight years, that could mirror some of what the bicameral group ultimately proposes. The Problem Solvers plan does not include offsets, however, as those continue to be negotiated in the bicameral talks.