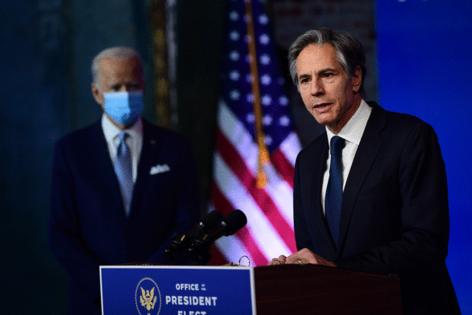 A top U.S. envoy appealed to Iran to accept a “mutual return” to a landmark nuclear agreement with world powers as diplomats are set to gather to negotiate a cap on the Persian Gulf country’s atomic program in exchange for sanctions relief.

“We are making progress, but much work remains ahead of us,” Louis Bono told a closed IAEA meeting late Tuesday. “Confidence must be rebuilt — in Washington, in Tehran and elsewhere. We further urge Iran to join the U.S. in reaching and implementing an understanding for a mutual return to full compliance.”

The remarks in Vienna preceded testimony by U.S. Secretary of State Antony Blinken, who warned the Senate Foreign Relations Committee on Tuesday that Iran’s nuclear program is “galloping forward” in the absence of an agreement. Iran, home to the world’s No. 2 natural gas and No. 4 oil reserves, began enriching uranium close to the levels needed for nuclear weapons in April.

The European Union expressed “deepening concern” with Iran’s decision to elevate enrichment levels at the same time that it restricts access by international monitors. Enriched uranium is the fuel needed for power reactors and bombs. Iran maintains its activities are exclusively peaceful.

Iran won’t be subject to formal censure at this week’s IAEA board meeting in the Austrian capital, the EU confirmed last week. Diplomats are gathering for a sixth — and possibly final — round of talks to restore the 2015 accord.

The IAEA warned earlier this week that reviving the deal will become more difficult later this month, after Iran’s presidential election on June 18 and when a temporary monitoring pact expires on June 24.

“It’s becoming increasingly difficult,” IAEA Director General Rafael Mariano Grossi said Monday. “What’s going on is serious. We have to be aware of this. We cannot limit and continue to curtail the ability of inspectors to inspect and at the same time pretend there is trust.”