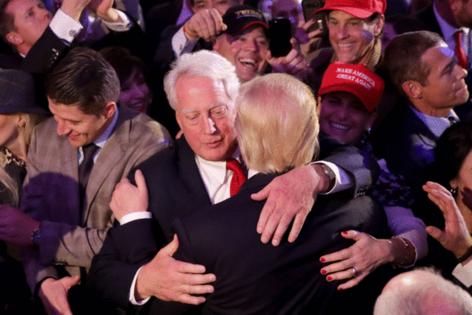 Joshua Hall, of Mechanicsburg, Pennsylvania, was arrested Tuesday morning and charged with wire fraud and identity theft for getting hundreds of people to send him money for the political group, supposedly for the purpose of getting Trump re-elected. Federal prosecutors in New York claim Hall used the money for personal expenses.

The alleged scam came to light last year after Trump himself responded to an article on a conservative site that said his sister, Elizabeth Trump Grau, had joined Twitter to support efforts to overturn the vote. But Grau’s Twitter account was fake and had been created by Hall, who also created social media accounts last summer with the names and photos of Trump’s son Barron and his brother Robert, who died in August.

Hall told the New York Times in December that he was “just trying to rally up MAGA supporters and have some fun” and that he didn’t intend to “dupe people out of money.”

He faces as long as 20 years in prison if convicted of the wire fraud charge and a mandatory two-year sentence if found guilty of aggravated ID theft. He was released on a $25,000 bond after appearing in federal court, prosecutors said.