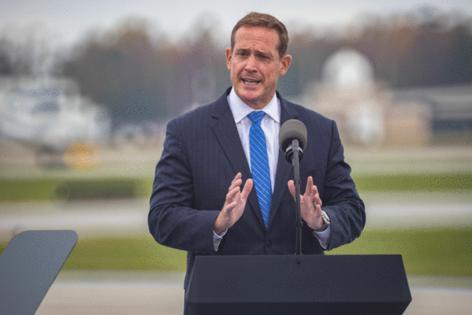 Former President Donald Trump took sides in North Carolina’s open Senate race over the weekend, endorsing GOP Rep. Ted Budd. In Congress, Budd proved to be a loyal Trump ally, but he did break with the former president on a handful of issues.

Budd voted for bills that had Trump’s support 91.5% of the time from 2017 through 2020, according to CQ Vote Watch. That’s slightly below the 92.1% average for all Republicans during that time, and below the 94.2% presidential support rate notched by another North Carolina Senate candidate, former GOP Rep. Mark Walker.

But that didn’t stop Trump from using his Saturday speech at the state’s Republican convention to throw his support behind Budd, who like Trump arrived in Washington after winning the 2016 election. The endorsement came after Lara Trump, the former president’s daughter-in-law and a North Carolina native, announced that she would not be running for Senate herself.

Budd, Trump said, is “a great politician, but more importantly, he’s somebody that loves the state of North Carolina.” Trump noted Budd had “always been with me, always been with Mark and Deb and all of us,” referring to Trump’s former chief of staff, Mark Meadows, and Meadows’ wife. Budd is a member of the hard-right House Freedom Caucus, which Meadows previously led.

Trump also said that he could not endorse someone who has “already lost two races,” an apparent reference to former GOP Gov. Pat McCrory, who jumped into the Senate race to replace retiring GOP Sen. Richard M. Burr in April. McCrory ran unsuccessfully for governor in 2008, but won on his second attempt, in 2012. He lost a bid for reelection in 2016 to current Democratic Gov. Roy Cooper.

McCrory criticized Trump’s decision to endorse Budd, saying Budd “has done more to oppose the Trump agenda than anyone in this race.”

Budd voted against two spending bills Trump signed that included relief for the coronavirus pandemic. On March 14, 2020, Budd was one of 40 Republicans, including a number of Freedom Caucus members, to oppose a package that included funding for additional testing, food assistance and grants to expand unemployment insurance.

Budd wrote on Twitter that the package was “deeply flawed in both process and substance. It was written in secret and sprung on House members at midnight with minutes to digest billions of dollars in new spending and regulatory impact.”

Budd was one of 50 Republicans to oppose another pandemic relief package on Dec. 21, 2020, which included $900 billion in pandemic relief. He said in a statement at the time, “I wish I could have voted for a targeted COVID relief bill several months ago. We need to end economic lockdowns and support small businesses and their workers. But this package is a classic Washington shakedown game, and I’m not playing it.”