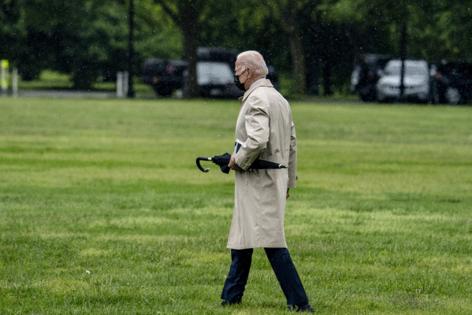 WASHINGTON — President Joe Biden’s ambitious $400 billion plan to improve in-home care for the elderly and lift wages for millions of workers may be limited by states’ ability to opt out, based on early proposals from Congress.

The leading legislative draft in discussion would channel the funds through the U.S. government health-insurance program Medicaid and tie the money to higher reimbursement rates and training for in-home workers, according to congressional aides familiar with the matter who declined to be identified because the deliberations are private.

Funding through Medicaid, which already handles payments for most personal-care services for seniors and people with disabilities, is seen as the fastest and most direct way of getting the money out.

But states, which administer Medicaid, would be responsible for ensuring that higher wages get passed down to workers and would have the option to take the federal money or not, according to the people. This would be similar to Medicaid expansion under the Affordable Care Act, which a dozen states haven’t adopted. The proposal hasn’t been finalized and details could change as talks continue.

Going through Medicaid would limit Biden’s home-care plan in scope, and increase inequities along state lines. Some of the worst-paid home-care workers — a vast majority of whom are women, minorities and immigrants — are in southern and Republican states that haven’t adopted Medicaid expansion under Obamacare.

The mammoth task of overhauling home care in the U.S. illustrates the many challenges the Biden administration faces in implementing and funding his $4 trillion economic proposals. As the population ages, in-home care workers have become one of the fastest-growing segments of the labor market, and yet they are currently paid so poorly that one in six live in poverty, according to Paraprofessional Healthcare Institute, a New York-based nonprofit that advocates for care givers.

“It’s significant, it’s historic, but it’s just the first step,” Robert Espinoza, vice president of policy at PHI, said of Biden’s plan. “It might be successful, but in a measured way. There may be inequities in the success.”

The plan is now in the hands of Congress, where at least four committees are crafting a bill with input from interest groups for the aging, disabled and labor communities.

The main proposal is led by Sens. Bob Casey of Pennsylvania, Maggie Hassan of New Hampshire, Sherrod Brown of Ohio and Rep. Debbie Dingell of Michigan, all Democrats. To encourage buy-in from states, their draft calls for the federal government to pay most or all the costs for the first few years, the aides said.

Medicaid is the largest payer for long-term support services such as home care. Its Home and Community Based Services program is optional for states, which has led to a patchwork system with different eligibility, plans and financing in each state.