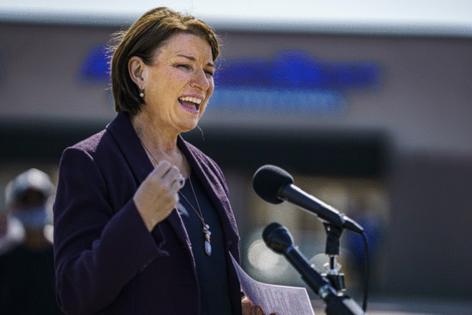 WASHINGTON — By most political calculus, the sweeping election reform bill that Democratic Sen. Amy Klobuchar of Minnesota is trying to shepherd through the Senate is a moonshot: hard to achieve and fraught with complications.

For "anyone who is serious about trying to get something done to make it easier for people to vote ... we're ready to go," Minnesota's senior senator said in an interview.

Dubbed the "For the People Act," the bill affects everything from voter registration to absentee ballots to campaign finance to ethics laws. Its scope makes it an easy target for Republican opposition.

Republican Senate Minority Leader Mitch McConnell criticized the legislation during a March hearing as being "nowhere near ready for prime time. It's an invitation to total chaos."

Republicans also charge that the bill is an unconstitutional attempt by the federal government to wrest control of elections from the states.

As the bill faces a crucial May 11 markup before the Senate Rules Committee Klobuchar chairs, she is talking to colleagues and proposing changes to the bill. She has invested a big piece of her political reputation in "For the People" because she believes it is the most important voting rights law in half a century.

Still, former Carleton College political scientist Steve Schier warned, "there is a harsh and probably unbridgeable partisan divide on this that's not going to be overcome."

"For the People" aims to ensure access to remote voting that in 2020 helped spark the largest voter turnout in 120 years, despite the pandemic. Meanwhile, restrictions on remote voting are now passing in many Republican-run state legislatures in reaction to former President Donald Trump's unsubstantiated claims that massive voter fraud cost him the 2020 presidential election.

Those competing approaches may be irreconcilable.

Klobuchar will likely be able to get the bill out of her committee next week on a party-line vote. She said she has not given up on getting the bill passed by the full Senate. She said she "would love to get Republican support," but acknowledged that there were "not really indications of that now." Republicans, she said "have filed more than 300 bills that make it harder to vote just at a time when Americans showed their engagement in democracy."