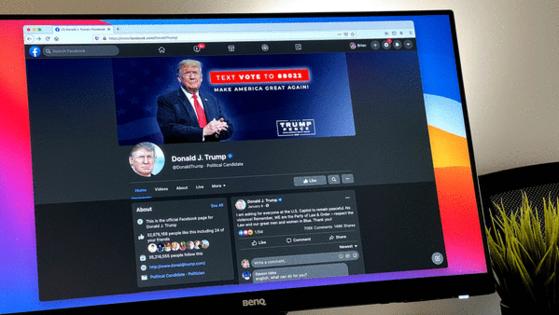 WASHINGTON – During most of Donald Trump's time in the White House, Silicon Valley could regard the legal threats Republicans hurled its way as a sideshow: unfocused, unserious, untenable.

But a campaign launched in a cauldron of conservative grievance — over censorship allegations, complaints of "woke" corporate values and the power wielded by a few Bay Area billionaires — has, in former President Trump's absence, morphed into something far more worrisome to big business.

The GOP push to break up, or at least punish, Big Tech is now an unexpectedly disciplined movement that is causing corporate concern far beyond the boardrooms of Silicon Valley, as the party's identity is increasingly focused around reining in the power of large companies.

The shift is shuffling alliances inside the party and out. It is also moving many Republican lawmakers to abandon a decades-long conservative free market orthodoxy to join progressives in demanding the federal government vastly expand its antitrust operations. The decision by Facebook on Wednesday to extend its ban of Trump from the platform has further propelled the movement.

To many in the GOP, big business has become a more attractive target than big government.

"They had been listening for years to the economists who tell them firms should be able to do anything they want," said Matt Stoller, director of research for the nonpartisan American Economic Liberties Project, which advocates the dilution of corporate power. "All of a sudden they are confronting an economy and political order where that has become very difficult for them."

Some of the most aggressive and potentially effective action on the antitrust front, Stoller said, is now being pursued by Republicans. In federal court, he noted it is Republican attorneys general who have been most forceful in their antitrust cases against Google and Facebook, alleging the companies are using illegal, monopolistic tactics to dominate the marketplace and mislead users. The landmark antitrust action against Google filed by the Justice Department was launched in the final weeks of the Trump administration.

The ideological lines are blurring so fast it is hard to keep track of who in the GOP falls where and whether the rhetoric is coming from Sen. Ted Cruz or Sen. Bernie Sanders. "Any massive accumulation of power is bad," longtime big business ally Cruz, the Texas Republican, tweeted recently, branding "Big Corporations," "Big Tech" and "Big Hollywood" just as dangerous as "Big Government."

The antitrust crusaders on the left are skeptical. Both Sanders (I-Vt.) and Massachusetts Sen. Elizabeth Warren, who launched the #BreakUpBigTech movement before it was in vogue with conservatives, say Republicans remain very much beholden to big business. They point to the big corporate tax breaks championed by the GOP and its blocking a $15 minimum wage.

Warren suggested the right is not experiencing a titanic shift so much as a tantrum after the companies made richer by the tax cuts dared speak out against GOP voter-suppression efforts. "Republicans have finally been called out," she told the Daily Beast. Republicans had assumed, Warren said, "so long as they cut taxes for corporate America, everything will be sunshine and roses. They're wrong."