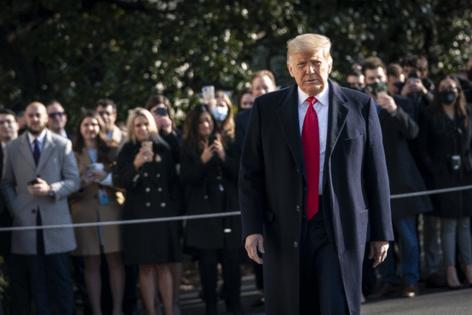 However, the board said the decision was "inappropriate" based on the company's own policies, which allow for removal of content, a time-limited suspension, or permanent deletion of a user's accounts, but not indefinite suspension.

As a result, the board said, Facebook must reexamine its decision and decide on the appropriate penalty within six months, meaning Trump could be allowed back on the platform later this year. The decision was "indeterminate and standardless," the board said.

"In applying a vague, standardless penalty and then referring this case to the Board to resolve, Facebook seeks to avoid its responsibilities," the board said. "The Board declines Facebook's request and insists that Facebook apply and justify a defined penalty."

Still, the hotly anticipated decision by the board, composed of human rights activists and legal experts, is a major blow to Trump, whose use of social media was key to his political rise.

"Trump's posts during the Capitol riot severely violated Facebook's rules and encouraged and legitimized violence," the board said in a statement posted to Twitter.

The board found that two of Trump's Facebook posts on Jan. 6, in which he called the rioters "very special" and "great patriots" and told them to "remember this day forever," violated a Facebook policy that prohibits support for individuals engaged in violence. Five people died as a result of the riot, including Brian D. Sicknick, a Capitol Police officer.

"In maintaining an unfounded narrative of electoral fraud and persistent calls to action, Mr. Trump created an environment where a serious risk of violence was possible," the board said. "At the time of Mr. Trump's posts, there was a clear, immediate risk of harm and his words of support for those involved in the riots legitimized their violent actions."

At the time of the posts, Trump enjoyed a following of 35 million on Facebook and 24 million on Instagram, which is owned by Facebook and from which he was also suspended.

Whether those followers will have another chance to engage with Trump depends on Facebook, not the Oversight Board.

"If Facebook decides to restore Mr. Trump's accounts, the company should apply its rules to that decision," the board said. "In this scenario, Facebook must address any further violations promptly and in accordance with its established content policies."