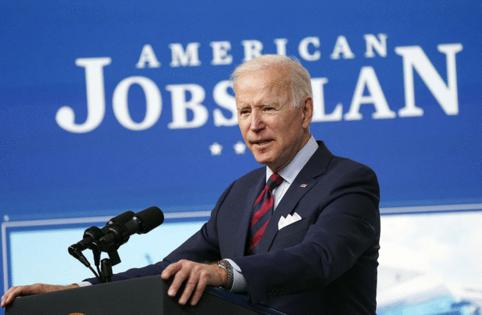 But even these measures may struggle to make headway against the highest levels of inequality in the developed world. The U.S. wealth divide widened further during the pandemic, as the top 1% of households added $4 trillion in net worth.

Biden has outlined plans to create well-paid jobs with infrastructure investments, expand child care and bolster the social safety net. Higher taxes on corporations and wealthy households will cover part of the bill. The president has also promised to boost minimum wages, broaden union rights and fight racial injustice in the economy.

On all these fronts, the administration is seeking to reverse trends that have become entrenched over decades. Here are some key measures to watch as Biden’s plans unfold.

Biden proposes to raise the top income tax rate to 39.6%. His plan, which cites loopholes that “reward wealth over work,” will almost double the rate on capital gains for those making more than $1 million and eliminate a method used by private-equity investors to lower their bills. A change to the way inherited assets are taxed may raise charges on the richest estates.

There are question marks over how effective the plan will be in the short term. The ultra-wealthy are already racing to transfer assets to heirs to avoid any hit. Biden abandoned a proposed change to the estate tax, which allows up to $11.7 million to be transferred upon death before a 40% levy kicks in.

Biden also proposes to raise the charge on corporate profits to 28%, reversing half of his predecessor Donald Trump’s 2017 tax cut, and his administration is seeking international accord on a minimum tax for big global companies. The contribution of business to the total U.S. tax take has been steadily declining. The figure was 7.6% in 2018, the lowest since at least 1960.

Biden says his investment plans will create union jobs, which typically pay significantly more and have better benefits. He’s backing the Protecting the Right to Organize Act to empower unions, though it faces long odds in the Senate.