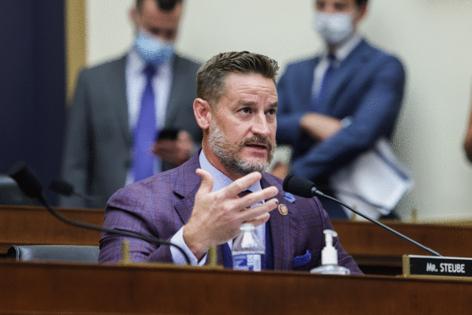 Steube signed a March 10 letter to top Democrats spearheaded by Sen. Ted Cruz, R-Texas, and Rep. Ted Budd, R-N.C., urging them to stop their efforts to bring back earmarks for the fiscal 2022 budget cycle.

“Nothing epitomizes what is wrong with Washington more than pork-barrel spending in the form of congressional earmarks,” reads the letter from 35 Republicans in both chambers.

Yet before last week’s deadline to submit line-item requests to the House Appropriations and Transportation and Infrastructure committees, Steube asked for 10 projects, ranging from $500,000 for a study of shoreline erosion in Charlotte County to $21 million for road-widening to ease congestion near the entrance to Interstate 75.

Earmarks, also known as member-directed spending, are the process by which lawmakers can steer funds to specific projects in their home states and districts.

Steube’s aides didn’t respond to requests for comment. But his apparent change of heart when it comes to earmarks epitomizes the sentiment conservative columnist George Will expressed in his latest opinion piece.

Citing House Republicans’ 102-84 vote in March to change their conference rules and allow earmarking, Will wrote: “It will be interesting to see how many of the 84 stick to abstinence while the majority of their caucus returns to sinning.”

The March vote was a secret ballot, in which 25 Republicans at the time plus Rep. Julia Letlow, R-La., who was sworn in later, didn’t vote. Including Letlow, there are 110 Republicans who didn’t submit requests for “community project funding” to the Appropriations Committee before last week’s deadline, or more than half the GOP conference.

Of those, at least seven submitted requests to the House Transportation and Infrastructure Committee for inclusion in the big surface transportation bill that panel is working on, however. Of the 45-member GOP freshman class, 23 haven’t requested appropriations earmarks; but four of those 23 have asked for highway bill earmarks — five if you count Rep. Darrell Issa, R-Calif., on his second Capitol Hill go-round.

Rep. Thomas Massie, R-Ky., who’s carved out a reputation as a libertarian spending hawk, drew fire from both parties, including President Donald Trump, last year when he held up remote voting on a massive $2 trillion coronavirus relief package. “Can we put the earmarks, the ass kissing, the cronyism, and the partisan crap aside until this is over?” Massie tweeted in response to the criticism.