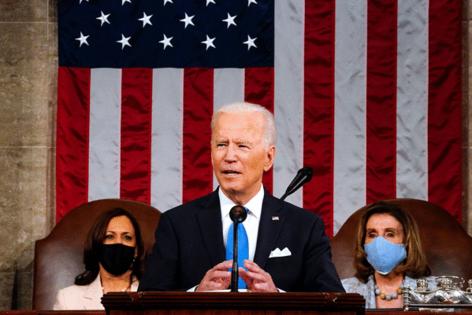 Three times already in his brief tenure, President Joe Biden has rolled out a far-reaching and extraordinarily expensive proposal to address large-scale problems in this country. First there was a $1.9-trillion plan to help individuals and businesses cope with the surging COVID-19 pandemic. Then there was a $2-trillion blueprint to build and repair American infrastructure, defined in unusually broad terms. Now comes a $1.8-trillion boost to programs that help American families, particularly those with low and moderate incomes.

The point of these efforts, Biden told a joint session of Congress on Wednesday night, is to create millions of good-paying jobs for working-class Americans, and to help prepare the next generation for the competition to come.

These legislative proposals came on top of dozens of executive orders Biden has issued to target an array of problems related to climate change, immigration, gun violence, discrimination and healthcare, among other major issues.

For someone belittled during the campaign for allegedly having little energy and no ideas of his own, Biden has been remarkably active, ambitious and, for lack of a better word, wonky. But his work has given rise to a new criticism: that Biden has abandoned his campaign pledge to unify the country and make a hopelessly polarized government functional again. In the eyes of his Republican and right-of-center critics, the moderate Biden who won the presidency has been replaced by a radical.

That’s news to progressive Democrats, whose calls for Medicare for all, a Green New Deal and the elimination of college debt have yet to bear much, if any, fruit. Here’s a far better framework for understanding Biden’s first 100 days: He’s trying to adapt the federal government quickly to the needs of a 21st century United States after two decades of distraction, recession and withdrawal. Like President Eisenhower launching a federal interstate highway system in Cold War America, Biden is trying to gird the country for a world that is warming, globally connected and hampered by debilitating inequities.

It’s a big job, made more difficult by the vast partisan divide. Presidents George W. Bush and Trump saw little or no role for Washington in tackling these issues, and congressional Republicans stopped President Obama from accomplishing much after his first two years.

But (to borrow a Biden phrase) here’s the thing: These are mainstream issues. Climate change is affecting every part of these United States, and it’s just going to get worse unless we all do something. The prosperity gap is widening as too many secure, high-paying jobs are lost, replaced too often by precarious and low-paying ones, and as the spoils of economic growth go to the wealthy. The tools families need to climb the economic ladder are too hard to come by, particularly for single parents and families who can’t afford to keep a caregiver at home.

We all have a stake in solving these problems, which starts with understanding how different they are from the ones that the country dealt with in previous generations. Consider, for starters, that some 55 million people — about a third of the U.S. workforce — did gig work in 2017; a 2015 study estimated that nearly 1 in 6 U.S. workers relied on gig, freelance and temp jobs for their livelihoods. A single, steady job may still usher many Americans into the middle class, but their ranks are shrinking fast.

And yet some in Washington can’t seem to admit that new times call for new approaches. The best example of this came when Biden proposed an infrastructure bill that looked beyond the structures supporting the movement of goods and the distribution of water, and sought to beef up the infrastructure that supports people’s ability to work, to invent and to adapt to a changing climate. Republicans scoffed and offered a counterproposal that called for less than 10% of the new spending Biden had sought, focused exclusively on conventional infrastructure, such as roads, airports and water systems. At least they included money to expand broadband networks, the sole concession to the passage of time.

Biden told Congress that he’s open to GOP ideas, but cautioned, “The rest of the world isn’t waiting for us. Doing nothing is not an option. We can’t be so busy competing with one another that we forget the competition is with the rest of the world to win the 21st century.”

Republicans can’t credibly argue that Biden is being polarizing simply because he doesn’t cling to their antiquated view of reality. We can debate whether the country needs to spend $2 trillion over the next eight years on infrastructure or $1.8 trillion on measures to boost families and children, but we can’t pretend that roads and bridges are the only things holding up our economy, or that we can fight poverty and build the middle class without better child care, more effective schools and more access to higher education.

The sheer size of Biden’s proposals has been remarkable, but put that in perspective. This country has a giant backlog of deferred maintenance work, not just on its crumbling asphalt, but on adapting its support system to today’s economy. The longer we wait to act, the bigger the ultimate bill will be. And with an election coming up next year that could end Democrats’ slim majorities in Congress, Biden has no time to waste.