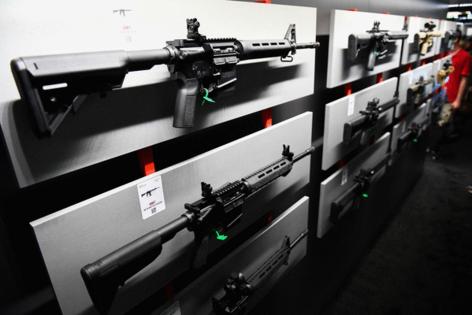 As for that inappreciable discussion about when in the New Year you should stop saying “Happy New Year,” we might finally have hit on a solution here in the good old USA: When the number of people killed in mass shootings in January flies past 60, yeah, maybe knock it off.

In little more than three weeks, 67 of us are dead already through this peculiarly American method of predictable carnage, at least as I sit down to write this. But it’s early in the day.

The Lunar New Year came in with a spray of bullets at a dance hall in California, where 11 died in the second of that state’s third mass shooting in eight days. The new year in Alabama brought a significant tweak to that state’s gun laws — you no longer need a permit to carry a concealed weapon.

The new year in Pennsylvania saw Altoona school directors vote unanimously to allow school security officers to access semi-automatic weapons in the event of an extreme emergency, I guess like if one fine day there’s a whole platoon of school shooters carrying assault rifles that has to be dealt with.

Talk about a mass shooting.

Of course, nobody would dare say that couldn’t happen, not in a country that won’t be satisfied until everybody who can lift one has a gun, the deadlier the better. The new year brought to Las Vegas a gun industry trade show that included an offering from WEE1 Tactical, namely the JR-15, a kids version of the semi-automatic AR-15 assault rifle favored by mass murderers coast to coast.

I only wish I was making that up.

“The JR-15 is a .22 Long Rifle that functions like a modern sporting rifle, however and most importantly its small size, lightweight rugged polymer construction and ergonomics are geared towards smaller enthusiasts,” the company says on its web site. “Our goal was to build to build a truly unique shooting platform that a Parent or Coach can safely use to teach a younger enthusiast.”

I guess it’s safer when parent and coach are capitalized.

A previous notice on the website said the JR-15 brand was “meant to be EDGY. We believe its (sic) exciting and will build brand recognition and loyalty.” Better yet, the company said, the children’s assault weapon “looks, feels, and operates just like mom and dad’s.”

But if this horrifies you, please be advised that things could be worse — at least WEE1 Tactical isn’t giving kids books! Fortunately, the new year brought new book laws to Florida, where Gov. Ron DeSantis has started boxing up classroom libraries until the books are properly “vetted.”

"My heart is broken for Florida students today as I am forced to pack up my classroom library," a Manatee County teacher wrote this week on Facebook, where another called DeSantis’ initiative “a travesty to education” that interfered with the long-standing strategy to “connect with books and develop a love for lifelong learning.”

All of that was in Judd Legum’s story for the website Popular.info, which said teachers are being told to make classroom libraries inaccessible or face felony prosecution, as per DeSantis-promoted regulations that books have to vetted by librarians, even though the governor views librarians and teachers as similarly “woke,” his favorite word.

Author Stephen King immediately went to Twitter with some timely advice. “Hey, kids! It’s your old buddy Steve King telling you that if they ban a book in your school, haul your ass to the nearest library or book store ASAP and find out what they don’t want you to read.”

What DeSantis especially doesn’t want them to read are books by and about Black people, particularly if those books are history books that make white people uncomfortable. The higher the learning, the less he likes it, and no one is surprised.

DeSantis’ Florida Department of Education rejected an advanced placement class for the state’s high schools on the dubious basis that it indoctrinates students to a political agenda.

“As submitted, the course is a vehicle for a political agenda and leaves large, ambiguous gaps that can be filled with additional ideological material, which we will not allow,” said Bryan Griffin, the governor’s press secretary.

The good news is that Florida trails only Texas for banning school books, with nearly 600 titles already pulled, and it’s got most of the year to catch up.

A treatment that improves Alzheimer’s disease would be a great advance, but Leqembi (lecanemab), which recently received accelerated approval from the FDA, is not that drug. Yes, lecanemab slows decline to an extent ...Read More