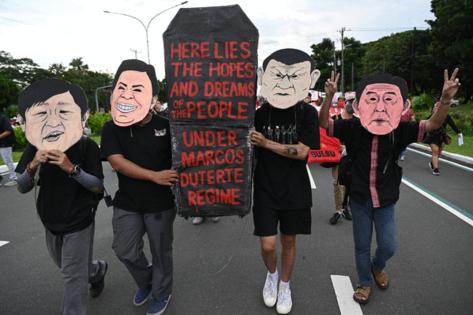 That darkness is enveloping the nation and its diaspora once again. In May 2022, 38 years after his family was exiled from the Philippines in the People Power Revolution, Bongbong Marcos Jr. was elected to a six-year presidential term alongside Vice President Sara Duterte, the daughter of former president and authoritarian Rodrigo Duterte.

Marcos and Duterte supporters romanticize martial law as a “golden age,” but many Filipinos — including Filipino Americans like us — reject this distortion of history.

This past year’s developments in the Philippines require Filipinos and non-Filipinos alike to preserve and reinforce our historical memories of dictatorship. Only through a mass movement that remembers the truth of the past can we confront the present-day threat of the Marcos-Duterte administration.

When Marcos Sr. rose to power in 1965, he posed as a populist but made unpopular decisions. He supported the U.S. war in Vietnam, which allowed for the increased use of U.S. military bases in the Philippines; he devalued the peso relative to the U.S. dollar, increasing prices of basic goods and services for working Filipinos; and he violently put down student protesters who opposed his plans to run for a third term.

In 1972, Marcos declared martial law to bypass the two-term presidential limit, and multiple sectors of Philippine society erupted and exercised their right to political dissent: workers and peasants, youth and students, women, and Indigenous peoples.

Because martial law outlawed protests, activists organized underground to fight for social and political change. Their demands ranged from the restoration of civil liberties to winning a socialist revolution. But they all wanted to end the Marcos dictatorship, and they worked to end human rights abuses, such as political detention and torture, and to halt infrastructure projects that violated Indigenous sovereignty, such as the Chico Dam project.

Mass arrests, especially in the first years of martial law, caused many activists to flee the country and settle in major cities like Los Angeles. This anti-Marcos diaspora met like-minded Filipino Americans who were politicized by the civil rights movement, the antiwar movement, and the labor activism of Filipino farmworkers who migrated as U.S. colonial subjects in the 1920s and ‘30s.

In the 1970s and ‘80s, Filipinos in the U.S. and their allies formed organizations such as the Katipunan ng mga Demokratikong Pilipino, National Committee for the Restoration of Civil Liberties in Philippines, Movement for a Free Philippines, and Friends of the Filipino People. They educated the broader U.S. public on the atrocities of the Marcos dictatorship, lobbied Congress to cut military assistance to Marcos, and raised funds to free political prisoners.

Presidents Nixon, Carter and Reagan supported Marcos; as part of the 1951 Mutual Defense Treaty, Marcos helped the U.S. maintain its security interests in Southeast Asia, and in return, Marcos received military aid. But eventually he became too great a liability. In 1986, hundreds of thousands of Filipinos joined the People Power Revolution, flooding the streets of Manila to protest Marcos’ attempt to steal the election from Corazon Aquino. Outflanked, the Marcoses fled to Hawaii via a U.S. Air Force transport plane.

During his presidency, from 2016 to 2022, law enforcement and the military under Duterte killed upward of an estimated 30,000 Filipinos as part of a so-called Drug War. Victims of the Drug War are still waiting for the Philippine government to cooperate with the International Criminal Court and hold Duterte accountable, while the current president Marcos has promised to continue his predecessor’s campaign of terror.

In 2017, Duterte declared martial law for 60 days in Muslim-majority Mindanao, a historically resource-rich and war-torn region with the highest rates of poverty in the Philippines and a 400-year history of resisting colonial forces.

Faced with another era of fascist rule in the Philippines, activists living abroad are working with organizations such as Bayan USA and Malaya Movement USA to channel the spirit of People Power. On Sept. 20, 2022, Filipino activists held a rally at L.A.’s Unidad Park in Historic Filipinotown to mark the 50th anniversary of the declaration of martial law, to commemorate those killed under the Marcos and Duterte regimes and to protest historical revisionism.

It is crucial at this time to speak out against censorship and share fact-based news, since Marcos Jr., following his father’s example, has taken an aggressive stance against press freedom. And it is especially important for Filipinos and our allies in the U.S. to put pressure on the Biden administration to end support of the current Marcos administration through the Philippine Human Rights Act.

The fact that the Filipino masses, with support from progressive media and the U.S. Congress, ousted Marcos Sr. in 1986 suggests that we have the power today to prevent another dark and bloody period.

We have seen history repeat itself in a harrowing way with the return of the Marcoses to Malacañang Palace. But we could also see it repeat with another mass movement that draws on the legacy of people power to rebuild a genuinely democratic Philippines.