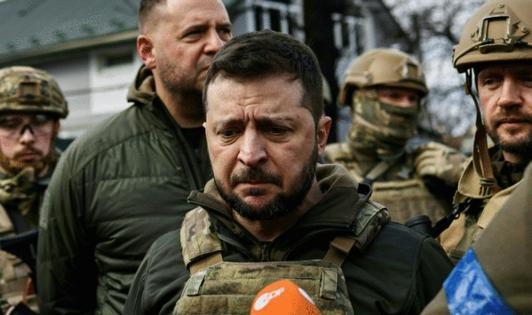 “This is real genocide,” Zelenskyy said while surveying the death toll in the town of Bucha.

The United Nations Genocide Convention defines genocide as acting “intent to destroy, in whole or in part, a national, ethnical, racial or religious group ... (by) killing members of the group; causing serious bodily or mental harm to members of the group; deliberately inflicting on the group conditions of life calculated to bring about its physical destruction in whole or in part; imposing measures intended to prevent births within the group; (and) forcibly transferring children of the group to another group.”

In the Aug. 8 issue of The New Yorker, Masha Gessen reported that there were 25,000 cases of war crimes committed by Russians against Ukrainians and asked: “What does justice look like for the victims of Russia’s atrocities?” Masha noted that while in theory, international bodies have the authority to prosecute war crimes wherever and whenever they occur, Russia’s leaders have still not been brought to account for atrocities committed in earlier conflicts, including Ukraine.

Let’s look back. The history of prosecuting war crimes began with the Nuremberg trials of 1945. Despite adopting the premise that some crimes are so heinous that the international community must step in to restore justice, prosecutions have resulted in few convictions.

The International Criminal Court, or ICC, has from inception issued arrest warrants for 38 people; only 10 have been convicted.

The ICC is, however, one of multiple possible jurisdictional paths worth considering for prosecution of war crimes in Ukraine.

Tufts University associate professor Tom Dannenbaum wrote in March for the national security-focused forum Just Security that another path to justice could be through an ad hoc international tribunal; a domestic court exercising territorial jurisdiction, such as in Russia, Belarus or Ukraine; or a court exercising universal jurisdiction. He correctly noted, however, that Russia’s veto power over any attempt by the U.N. Security Council to authorize prosecutions squelches actions being taken by the ICC, of which Russia is no longer a member.

Washington University in St. Louis adjunct law professor Milos Ivkovic said in a recent interview that nations that eschew legal action against Russian acts of aggression, war crimes and crimes of genocide can become guilty of aiding and abetting these crimes. Imposition of sanctions, he said, is far from a sufficient response to heinous acts threatening the world order.

Ivkovic bases his argument on the doctrine of jus cogens — compelling law — which is described as a peremptory (mandatory) norm of general international law permitting no derogation. Jus cogens norms sit at the apogee of international norms and place obligations on everyone.

Many nations have agreed to sanction the Russian government, but, as Ivkovic said, sanctions provide only injunctive relief as a temporary measure to stop existing harm from continuing. Sanctions cannot punish specific perpetrators of war crimes or crimes against humanity. Only through prosecution can those who commit such crimes be brought to justice.

Genocide and other violations of jus cogens, Ivkovic said, cannot be excluded from legal action by international courts. So why are modern-day war crimes not resulting in criminal prosecutions, even in absentia, of individual perpetrators?

One reason is that nations that do significant business with bad actors such as Russia and China fear a loss of access to materials and profits from the imposition of sanctions and threats of criminal prosecution. Another fear is that the perpetrators might escalate to nuclear weapons, if threatened with prosecution. What would they have to lose?

Ivkovic suggested that the horrors committed by those who fear no personal reprisals will continue if bad actors are not brought to justice. We must speak up, he contended, and prosecute, or we will never have peace. However, bad actors and their allies exercise pressure upon anyone or any nation that advocates for sanctions — and especially for prosecution.

Ivkovic said there are three levels of attack: First, nations such as Russia and China publish disinformation that contradicts or refutes the charges against them and often includes accusing their accusers of the same crimes, e.g., “Who are they to judge us?”

Second is creating narratives with the intent to inspire disrespect, outrage or even violence against their accusers. Doxxing — revealing home addresses, phone numbers, etc. — is another tactic.

If a plea for prosecution inspires governments to begin to take action, people close to those speaking up become targets. International travel then becomes a nightmare, as certain governments will respond favorably to extraditing those frivolously charged with crimes in order to shut them up.

Finally, at worst, those who push for prosecution face the ultimate threat — injury or death.

It is not hard to silence one advocate for justice, Ivkovic noted. It’s easy enough to overcome the accusations of a few but more difficult to stop when public outcry cannot be ignored. And speak out, we must, Ivkovic warned, if we profess to believe that human lives are worth more than cheap natural gas. Therefore, Ivkovic supports Congress holding hearings on the ongoing genocidal activities.

Keeping silent in the face of barbarity emboldens the bad actors, who, seeing that no one is stopping them, feel no compunction to change their behavior. Only with a united front willing to demand that genocidal criminals face consequences can society prevail over barbarism.

Duggan Flanakin is director of policy research at the Committee for a Constructive Tomorrow, a nonprofit that supports free-market solutions to environmental issues.