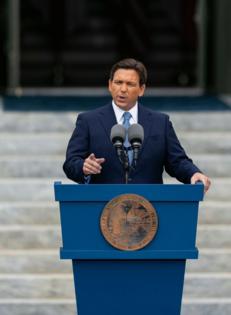 His “Teachers’ Bill of Rights” sounds like an overdue effort to give more dignity — and pay — to the people educating our children. That’s not entirely wrong, it’s just the upside of the education proposal the governor announced on Monday. But it comes with a catch, the dark side, better described as the “Teachers’ Union-Busting Bill.”

DeSantis’ relationship with public school teachers has been one of feeding with one hand and punishing with the other. He has allocated millions to raise teachers’ starting salaries. That, however, has not been enough to move Florida from the 48th spot in the nation in average public school teacher pay, according to the National Education Association. At the same, he’s treated educators as pariahs in his culture wars, accusing them — with little to no proof — of indoctrination and teaching ideology.

His latest proposal, which he wants legislators to approve this year, follows the same pattern.

Districts get to decide

DeSantis wants an extra $200 million annually toward salary increases, bringing the yearly total to $1 billion, the Herald reported. School districts would choose how to prioritize that money, whether by continuing to fund starting pay beyond the current $47,500 or by investing in veteran teachers, who have rightfully complained they were left out when the state set the minimum salary.

“All that additional money can go to increase teacher salaries however the district wants to do it, and we think that’s important to both recruit and retain good people in the classroom,” DeSantis said at a press conference at Duval Charter School in Jacksonville.

There are a few other sensible bullet points in DeSantis’ plan, such as asking voters to set term limits for school board members. Few people will argue against his idea to require teachers’ unions to provide financial reports to the state and allow state auditors to investigate fraud — though in DeSantis-land that might be weaponized. But that’s where the “Teachers’ Bill of Rights” ends and the terrible fine print begins.

The governor wants to essentially kill teachers’ unions, the very same organizations that — albeit not perfect — have fought to earn educators more rights through bargaining. And DeSantis does that so cleverly he will have his constituents believe he’s doing all of it in the name of teachers themselves.

The dagger the governor wants to drive through the heart of collective bargaining is the requirement that teachers’ unions represent at least 60% of eligible employees (in Florida, employees cannot be required to join a union). Last year, he talked about setting a 50% threshold, and it’s unclear why his latest proposal increases it. It’s worth noting that United Teachers of Dade has 50.7% representation, UTD spokesman Julio Ligorria told the Herald Editorial Board on Monday. UTD and DeSantis have butted heads on school re-openings and masking requirements during the pandemic, and UTD President Karla Hernandez-Mats was his Democratic opponent’s running mate in the midterms.

Hernandez-Mats might also be the inspiration for another proposal in DeSantis’ plan to prohibit union officials from earning more than the highest paid employee they represent. DeSantis has often taken jabs at Hernandez-Mats for her salary, which was almost $170,000 in 2021-22. However, a UTD tax filing from 2020 shows her salary was $197,225 the previous year. Ligorria told the Editorial Board that “zero taxpayer dollars” fund her salary.

While salary caps aren’t necessarily a bad idea — and DeSantis knows they are popular with the public — the question arises about how unions in large districts such as Miami-Dade County, with hundreds of schools and thousands of bargaining unit members, will recruit top officials if they cannot pay them an executive salary.

If the issue is union bosses abusing their power, why target only teachers’ unions?

Republican lawmakers made it clear what their target was when they exempted unions representing police, firefighters, correctional officers and correctional probation officers from a 2022 bill that would have prohibited unions from automatically deducting dues from paychecks (the bill would have affected other public-sector unions besides teachers). The proposal died, but DeSantis wants to revive it this year. He said it “maximizes freedom to choose” during a speech in December, but the true intent appears to be to make it less convenient for teachers to join unions, therefore making the 60% membership threshold harder to reach.

It’s impossible to blast the governor for wanting to pay teachers more. But the moniker “Teachers’ Bill of Rights” is pure spin and public relations. Unfortunately, in Florida nowadays, no good policy comes without a not-so-hidden agenda.

It really was only a matter of time before the two rallying cries of the far right — election fraud and gun rights — came together in the most dangerous ways. The deadly Jan. 6, 2021, Capitol insurrection offered just ...Read More