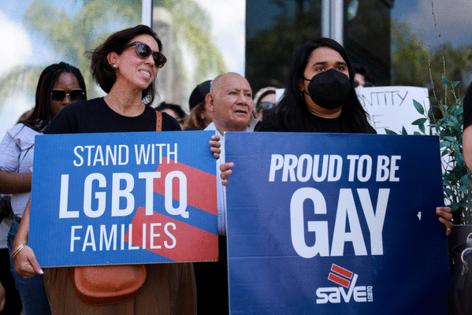 All this set against a spike in extremism and antisemitism in Florida.

None of this is by accident. Florida has very intentionally become ground zero in a national effort to bring back bigotry.

It has been half a century since singer and pageant winner Anita Bryant became the face of discrimination in Florida. Decades later, Bryant’s legacy is back on steroids in the Sunshine State.

We see it in the governor’s office hurling names like “groomers” at supporters of equality and inclusion, accusing them of supporting pedophilia.

And in GOP lawmakers’ obsession with targeting LGBTQ families year after year with laws about bathrooms, youth sports, adoption and attempts to censor classroom and even workplace discussions.

These aren’t the issues most Floridians, even many sensible conservatives, care about. Yet Florida is coming off a legislative session where the hottest topic for GOP legislators wasn’t fixing Florida’s in-crisis insurance market or strengthening public education. It was demonizing gay people.

Backers of the “Parental Rights” or “Don’t Say Gay” law often claim the law was simply about making sure children in kindergarten through third grade don’t hear about sexual activity. Those people lie. Read the bill.

It affects all grades — up through high school. And it never once mentions “sexual activity.” It focuses on “sexual orientation.” If you don’t know the difference, educate yourself.

As Orlando playwright Michael Wanzie said in a column for the Sentinel earlier this year: “We all … know what this bill is about, so please don’t pretend otherwise.”

The bill passed after Gov. Ron DeSantis’ office accused opponents of supporting pedophilia, with his spokeswoman saying: “If you’re against the Anti-Grooming Bill, you are probably a groomer or at least you don’t denounce the grooming of 4- to 8-year-old children.”

These tactics are blatant, ugly and dishonest. “Accusing LGBTQ people and allies of pedophilia is the oldest, most dangerous anti-gay trope there is,” said outgoing state Rep. Carlos Guillermo Smith.

So was it any surprise to see Nazi flag-toting protesters parroting those same bogus and dangerous talking points last weekend? Not to Jason DeShazo, the organizer of the Lakeland fundraiser.

“We have seen so much political hate and lies about the LGBTQ+ community in the last several years,” DeShazo said in an email Tuesday. “Laws that cause harm to our youth and families. It’s truly sad.”

Most of America doesn’t think this way. Many Republicans don’t think that way. A Gallup poll earlier this year showed that a record 71% of Americans believe same-sex marriages should be legally recognized.

Yet Marco Rubio called the congressional bill that would protect that right a “stupid waste of time.”

Compare that to Mitt Romney, who said: “This legislation provides certainty to many LGBTQ Americans, and it signals that Congress — and I — esteem and love all of our fellow Americans equally.”

True small-government conservatives don’t believe government should tell private citizens who they can marry or what they can discuss. And several Florida Republicans in the U.S. House sided with Romney, including Michael Waltz and most South Florida reps.

You’re free to be uncomfortable with homosexuality. What the Supreme Court ruled is that you’re not allowed to take away other people’s rights. It’s called “equal protection,” and it’s enshrined in the U.S. Constitution.

Yet Florida Republicans who crave big-government control have been dragged kicking and screaming into the age of equality.

Florida was forced by the Supreme Court to allow gay marriage and was one of the last states in America to allow gay adoption. This state’s politicians were reduced to offering laughably embarrassing excuses as justification for discrimination.

They argued it was better for a child to have no home than a loving one with two moms. The state’s highest-profile anti-gay adoption “expert” turned out to be a quack who was later found traveling with a gay escort.

Former Attorney General Pam Bondi was so desperate for reasons to ban gay marriage that she argued marriage was meant for couples to raise children in “enduring family units” ... an interesting stance for a woman who was twice divorced with no kids of her own.

Orlando filmmaker Vicki Nantz, who produced a documentary about Anita Bryant, says Florida politicians today are just continuing something Bryant taught them long ago — “that if you further demonize an already demonized minority group, especially by dishonestly suggesting they will harm your children, you can get people to vote for you, even against their own interests.”

Nantz noted that demonization and division also serve as a handy tool for politicians eager to distract citizens from the politicians’ own failures.

She’s right. If you’re more concerned about people you don’t know marrying each other than you are about this state’s rotten insurance market, shoddy treatment of special needs families, inadequate mental health system or many other problems, then you’ve been played.