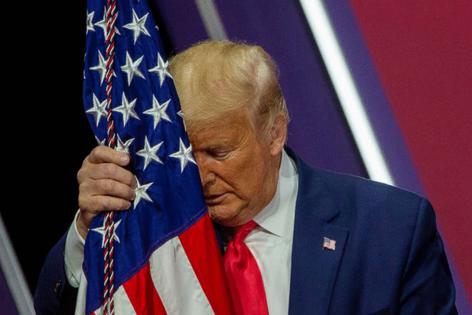 Upon taking office, every member of Congress must swear an oath to “support and defend” the United States Constitution. America is currently watching most congressional Republicans — including Missouri Sens. Roy Blunt and Josh Hawley and the state’s entire GOP House delegation — violate that oath in real time. What else can be said of supposed political leaders who sit silently while their party’s standard-bearer and presidential front-runner publicly calls for the “termination” of the Constitution for the sake of his own power?

Ex-President Donald Trump’s contempt for the nation’s founding document has long been evident in his words and deeds, but he crossed a dangerous new line (even for him) on Saturday. In a social media screed pressing his continuing lie that he was cheated out of reelection in 2020, he demanded that the Constitution be set aside so he could be restored to the presidency.

“A Massive Fraud of this type and magnitude allows for the termination of all rules, regulations, and articles, even those found in the Constitution,” he posted Saturday on his Truth Social network. He later followed up with: “UNPRECEDENTED FRAUD REQUIRES UNPRECEDENTED CURE!”

There was no significant election fraud, unprecedented or otherwise, but that’s beside the point. The Constitution is sacrosanct. Electoral disputes (both genuine issues and the bogus ones Trump keeps pushing) must be settled within the structure of the Constitution, not by its “termination.” It would be shocking to have to explain that to the average eighth grader. Having to explain it to a former president — one who stands a realistic chance of being elected to that office again in two years — is terrifying.

Not every unhinged Trump comment needs or deserves a reaction, but this one does. And yet elected members of Trump’s own party, whose condemnation would carry the most weight, have remained almost uniformly mute. The few who found themselves facing the question on the weekend talk shows generally mouthed some milquetoast rejection of Trump’s statements while carefully avoiding any condemnation of Trump himself for saying it. At least one, Rep. Dave Joyce, R-Ohio, said he would still “support whoever the Republican nominee is” for president in 2024, even if it’s Trump.

If a major presidential candidate calling for eliminating the Constitution isn’t enough to merit a preemptive, party-wide rejection of his candidacy, what is?

Most notable in this silent gallery of cowards is House Republican leader Kevin McCarthy, who needs to keep the Trumpers in his caucus happy to realize his dream of becoming the new House speaker in January. McCarthy has said that on the first day Republicans take over, they will read aloud “every single word” of the Constitution on the House floor. What a grotesque piece of theater that will be from a crowd that refuses to “support and defend” those words when it matters.