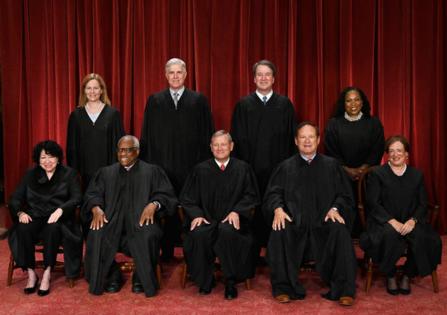 The conservative revolution at the U.S. Supreme Court has two prongs. One grabs headlines as the justices overturn long-established precedent on big-ticket issues like abortion, affirmative action and voting rights. The second is a less-noticed yet enormously ambitious transformation of the judiciary’s job. Put simply, the justices are placing themselves at the top of the tree of governance, radically curtailing the expert administrative judgment long exercised by the executive branch.

The court’s revolutionary program for transforming how administrative agencies enforce the law was on full display last Tuesday in the oral argument for the term’s major immigration case, Texas v. Biden. The case raises three distinct yet related issues: the separation of powers; whether states have standing to sue the executive branch over enforcing federal law; and the ability of a single court to block policy nationwide.

Begin with the separation of powers. At issue in the case is whether and how the president, through the Department of Homeland Security, can set priorities for detaining and deporting undocumented immigrants. Back in September 2021, DHS Secretary Alejandro Mayorkas issued guidance on exactly that question in a memo that said the department should prioritize three categories: people suspected of terrorism, those convicted of crimes, and those recently apprehended trying to cross the border unlawfully.

Setting such priorities is normal. Consider that there are some 11 million undocumented immigrants in the U.S., that Congress has passed laws ordering that many different sorts of undocumented persons “shall” be detained and deported, and that Congress hasn’t allocated anything like sufficient resources to detain and deport all of them. Given the impossibility of achieving anything even slightly approaching what the letter of the law would seem to require, the head of DHS must direct staff to prioritize.

But Texas and Louisiana went to court to argue that the Biden administration’s immigration priorities violated federal law. Their logic was that, in practice, they shirked the government’s obligation to detain and deport everyone covered by the law.

Historically, this claim would have gone nowhere because of the separation of powers. Congress passes laws. The president executes those laws. The judiciary evaluates the cases the executive branch has decided to bring.

The argument made by Texas and Louisiana threatens to upend this distribution of powers. In essence, the states are saying that the executive branch can’t articulate priorities whenever Congress has passed a law saying it “shall” do something.

Such a change in existing law would be transformational. At a minimum, it would remove authority from administrative agencies and give that power to the courts. Taken to an extreme, it would elevate the judiciary over the executive branch. Practically, it could cause administrative chaos, upending the policy priorities of many parts of the federal bureaucracy.

Yet the conservative justices seem poised to offer at least some vindication to Texas and Louisiana. At oral argument, Chief Justice John Roberts was clear. As he put it, “I think ‘shall’ means ‘shall.’” Roberts went on to acknowledge that “we’re in a position where … Congress has passed a law that is … impossible for the executive to comply with.” But, he explained, “it’s our job to say what the law is, not whether or not it can be possibly be implemented.”

Roberts was much less clear about what would happen next. He asked, rhetorically, “So shouldn't we just say what we think the law is, even if we think ‘shall’ means ‘shall,’ and then leave it for them to sort that out?”

This brings us to the second area in which a conservative judicial revolution is brewing.

The doctrine known as constitutional standing holds that the courts may only decide cases that are actual, real-life controversies between parties who have been concretely harmed and are seeking judicial redress. In classic terms, Texas and Louisiana should not have standing to sue the executive branch. They lack standing because they don’t suffer any direct, concrete harm when the executive branch sets priorities in law enforcement.

To be sure, Texas and Louisiana claim that it costs them money when some undocumented people aren’t detained and deported. But accepting that argument would essentially allow states to sue over almost any federal exercise of authority.

During oral arguments, Justice Elena Kagan pushed this idea hard. She expressed concern about creating “a system that nobody ever thought would occur, which is that the states can go into court at the drop of a pin and stop federal policies in their tracks.”

Kagan’s all-important point is that, if the Supreme Court agrees that Texas and Louisiana have standing in this case, then it will be changing the basic relationship between the federal government and the states. Ordinarily, she pointed out, “immigration is supposed to be the zenith of federal power.” By allowing the states to bring a lawsuit, she said, the court would be “creating a system where a combination of states and courts can bring immigration policy to a dead halt.”

Yet there appear to be at least five and perhaps six conservative votes for affording standing to the states. Although conservatives have historically been skeptical of expanding standing, they are more sympathetic to such an expansion when it gives power to states rather than to individual plaintiffs. Presumably the reason is that the conservatives understand that this will enable Republican-controlled state governments to intervene against Democratic policy priorities at the executive level.

Here’s where the third would-be conservative revolution comes in. Deciding in favor of Texas could allow a single federal court, including a district court, to rule that a federal executive policy must be “set aside” under the Administrative Procedure Act. In this case, a single federal district court in Texas blocked the Biden administration’s whole immigration policy framework nationwide, setting up subsequent appeals to the Fifth Circuit and then the Supreme Court.

This cuts across partisan lines. You may recall that during the Trump administration, liberal district court judges did temporarily block some of Trump’s executive orders — as with his Muslim ban. And Justice Ketanji Brown Jackson appeared to be with Roberts and Justice Brett Kavanaugh on the issue.

Last week, the Biden administration argued that a single judge should lack the sweeping power to set aside an agency action nationwide, saying that a judge only has the power to rule policy unlawful in their own jurisdiction, not everywhere in the country.

Roberts and Kavanaugh challenged this argument. The U.S. Court of Appeals for the D.C. Circuit, where both served, handles the lion’s share of administrative law cases. When that court sets aside agency action, the ordinary understanding of all parties is that the agency can’t act on the policy anywhere. That, both justices suggested, must mean that an order to set aside an agency’s action applies everywhere.

Interestingly, Justice Neil Gorsuch appeared to disagree. He is the court’s leading critic of the administrative state; but he also recognizes that it makes sense to say that a court can only exercise power within its own area of jurisdiction. That makes the DC Circuit a special case. For what it’s worth, I agree — I’ve always thought that a DC Circuit decision setting side a federal policy shuts the policy down everywhere because the executive branch is located within its jurisdiction. But that doesn’t mean a circuit court in Texas — or any other state for that matter — has the same power.

Nevertheless, if states can go to court and prevent the executive branch from using its enforcement discretion, it would enable judges anywhere to block federal policy everywhere. An activist judiciary at the district court level would the have the power to freeze policies it doesn’t like, then wait for the Supreme Court to deliver the deathblow.

Away from the headlines, the conservative justices are poised to change the rules of the game to give themselves more power. They are making rational, expertise-based administrative governance harder. They are enforcing literalism over common sense. And they are doing so as part of a concerted aim to produce revolutionary change — not, as they so often claim, to be neutral arbiters of the law.