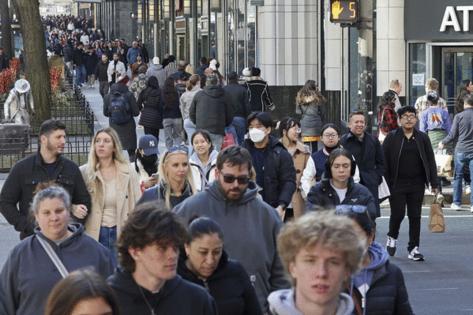 On the surface, the holiday retail season is off to a great start. Almost 200 million U.S. shoppers turned out in person and online from Thanksgiving Day to Cyber Monday, and holiday retail sales are expected to rise between 6% and 8% from last year to nearly a trillion dollars. Amazon reported its most successful launch of a holiday shopping season ever.

It’s enough to make you think COVID-19 and the hard times that went along with it have disappeared for good, especially as the labor market remains tight, still pushing up wages.

Dig a little deeper, though, and there’s evidence that consumers, who account for 70% of economic activity, are feeling bleaker than the headline numbers suggest.

With fears of COVID-19 abating, for instance, retail foot traffic at brick-and-mortar stores has been up about 2.9% from last year, according to inventory consultancy Sensormatic Solutions. That’s good news, but the average shopper is spending less per in-store visit.

Similarly, the strong percentage increase in retail sales owes some of its apparent buoyancy to the economy’s biggest threat: Inflation has sent the cost of goods soaring this year. Sticker shock, some analysts say, will result in consumers ultimately buying less merchandise and spending more on travel or other experiences.

Another sign of the mixed outlook is that shoppers drained by inflation have less cash on hand than last year. While spending has gone up, more consumers have covered it by dipping into savings, purchasing items with credit cards and using one of the myriad “buy now, pay later” services that carry late fees.

These “yes, but” caveats about holiday shopping help explain why consumers are growing less confident about the future of economic growth in America.

The Conference Board consumer-confidence index fell in November from the previous month, suggesting the economy is losing momentum and that consumers regard the short-term outlook as gloomier today than it was even just weeks ago.

Perversely, the caution among consumers is a positive for the nation’s central bankers. They recognize that inflation can be driven by psychological factors, where rising prices lead to a “spend now” mentality that puts additional upward pressure on prices.

After having massively jacked up interest rates in 2022 to combat inflation, U.S. Federal Reserve Chair Jerome Powell last Wednesday laid the groundwork for slowing the pace of future rate hikes. The slump in consumer confidence no doubt is pushing him in that direction.

Given the mixed holiday outlook, a shakeout could be looming as some retail chains and locations fare better than others. One early winner appears to be the suburbs, where retailers and landlords finally are experiencing a welcome recovery from the pandemic. The amount of retail real estate space available for rent nationwide dropped nearly a full percentage point in the third quarter to the lowest level of availability in 17 years of tracking, according to real estate giant CBRE.

The outlook is tougher for urban shopping districts like North Michigan Avenue, where more than 900,000 of the 3.2 million square feet on the Mag Mile is available, nearly double the vacancy rate before the pandemic, according to Cushman & Wakefield. The Central Loop, River North and West Loop neighborhoods are also hurting.

While the surge in working from home is a factor, draining downtown of its customary foot traffic from commuters, so is crime.

An Urban Land Institute report published last year about revitalizing Michigan Avenue urged the Chicago Police Department to boost its enforcement and visible presence on the street. As Crain’s Chicago Business reported, theft in the CPD’s 18th District, which includes the Magnificent Mile, increased a shocking 74% from January through early November this year, compared with the same period in 2020. Car thefts have more than doubled in the district over the past two years. And while burglaries are down by more than half, robbery is up 22%.

In May, Illinois Gov. J.B. Pritzker signed legislation creating stiffer penalties for high-profile smash-and-grabs and other organized retail theft. Sorry, Santa, but the new law goes into effect Jan. 1 — too late for this holiday shopping season.

No one can say for sure whether the economy will lapse into a recession in 2023 or narrowly avoid one. It will be a close call either way. When labor-friendly President Joe Biden rightly urges Congress to squash a potentially catastrophic railroad freight strike, you know that Washington policymakers recognize the economy is spinning on thin ice.

Through their shopping behavior, American consumers are sending a sensible message: Enjoy the holiday season, but not too much. Stay alert for pitfalls and proceed with caution to avoid a reckoning next year.