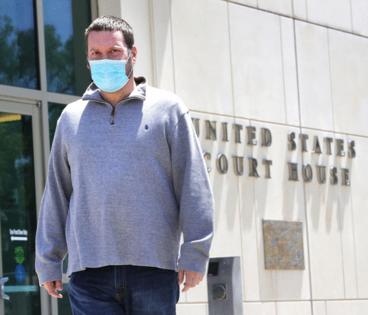 For his crimes — against minors, political adversaries and taxpayers — Greenberg will spend more than a decade behind bars.

The former Seminole County tax collector made national headlines as his litany of transgressions were revealed over the past two years. But one thing many newcomers to this story may not realize is that this story wasn’t really new at all.

The Orlando Sentinel started documenting Greenberg’s sordid history long before the feds ever got involved.

Back when he was impersonating a police officer, giving his buddies do-nothing, taxpayer-funded jobs, asking cops for special treatment and threatening political enemies.

Back then, most Florida power brokers looked the other way. It took the feds to come in and clean up this swamp.

Still, I can tell you one person who paid close attention to everything we wrote: Joel Greenberg himself.

Months before he was arrested, when Greenberg started talking about mounting a campaign for Congress in March of 2020, I wrote a column saying that idea seemed absurd. My contention: Even if GOP power brokers had no problem with Greenberg’s money-wasting tendencies (he’d put three of his own groomsmen on the tax collector’s payroll, for Pete’s sake), I was confident voters would object.

Well, that column sent Greenberg into an apocalyptic frenzy. He lashed out on Twitter with all sorts of wild and bogus accusations, including that I was a “piece of s---” drunk driver who cheated on my wife.

Greenberg and some of his buddies had actually done this before. If I wrote a column that hit them square between the eyes — based on public records they knew they couldn’t refute — they’d accuse me of some manufactured atrocity. Another involved some confusing connection to strippers.

I would later learn that Greenberg had improperly used a confidential state database to look up information on me and my wife. When he couldn’t find anything more damning than a 15-year-old traffic ticket, he and his buddies just started making things up.

Normally, I just ignore petty attacks. I think most people see desperate measures for what they are. But I have no tolerance for unethical politicians who target my wife — who happens to be one of the kindest, most thoughtful people to ever walk this planet.

The newspaper offered to enlist lawyers to go after these guys, since their claims were documentably false. (In one case, one of the accusers’ family members had called to warn me about an impending bogus attack, saying it had gone too far.)

We didn’t sic lawyers on them, though. That was largely my wife’s call. She didn’t want to give any of these guys the satisfaction of amplifying their lies.

But last week — with the final chapter of Greenberg’s story being written and talk about more charges still possible — we decided it was time to share this.

Because you need to know: This is how the bad guys fight.

People caught doing bad, unseemly or illegal things often respond by attacking the people exposing them. It’s not just me or the Sentinel.

Harvey Weinstein tried to go after the reporters trying to tell the truth about his behavior. Closer to home, a columnist for the Florida Times-Union learned he was being covertly tailed by operatives for Florida Power & Light — a powerful utility that didn’t like his writing.

And it’s not just journalists either. Just ask Brian Beute.

Beute was a mild-mannered high school teacher when he started reading the Sentinel’s stories about Greenberg. He was appalled that state officials were sitting idly by as Greenberg acted with reckless abandon while also traveling to the White House and posing for pictures with Ron DeSantis and Matt Gaetz.

So Beute, a fellow Republican, decided to run for office against Greenberg and speak up about his actions. Greenberg then orchestrated the most heinous, lie-filled smear campaign of all — accusing Beute of sexually abusing one of his students. That is one of the six crimes to which Greenberg pleaded guilty.

On sentencing day, Beute said his wife and two daughters always knew the accusations were bogus, but that they still “endured the trauma of these dreadfully false accusations.”

Beute also praised the investigators who helped clear his name and the Sentinel writers who diligently documented Greenberg’s actions.

That’s a big part of what’s worth remembering here: Community newspapers like the Sentinel often do the grunt-work, beat reporting on local stories long before they become national sensations.

My colleagues chronicled Greenberg’s missteps and improprieties since he took office in 2016 — back when he was trying to conduct shady real estate deals with county money, using flashing lights and a badge to pull over a woman for speeding and asking a Lake Mary police officer not to give him a ticket for speeding.

Some of the best reporting was done by my former columnist colleague Lauren Ritchie, who meticulously documented how Greenberg had given millions of dollars in contracts to friends, cronies and political pals — often in exchange for doing little or nothing.

That’s what local journalists do. And they’re sometimes savaged for it.

Greenberg’s attorney said he suffered from mental illness. I don’t doubt that. I also think that, in some cases, Greenberg was played as a patsy by others who have yet to be held accountable. But I also believe Greenberg had a broken moral compass.

At one point years ago, he called me to say he wanted to apologize for the things he’d said about me. It was an odd conversation that left me with the impression he was going through some sort of formal atonement process.

I told Greenberg I had little interest in hearing private apologies for things he’d said or written in public. If he was sincerely remorseful, he would publicly account for his lies. He did not. And that was the last time we spoke.

Beute says he’s still frustrated that state officials did so little to keep Greenberg in check and on Thursday called on the governor to do a “thorough and exhaustive investigation” of where the state fell short.

I have little faith the governor will do so. But I can tell you this: The Sentinel’s team of journalists will keep on watching and reporting on all the local offices we cover, no matter what kind of threats come our way. Because that’s what newspapers do.