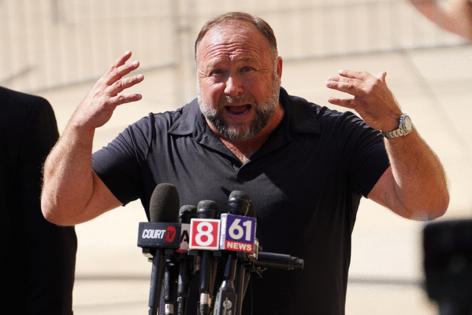 It’s been a busy few days for sentient scumbucket Alex Jones. Thursday, he hosted a certain rapper turned antisemitic ranter, squirming a little as his brother in hate praised Hitler and Nazis. Friday, Jones — who’s been morally bankrupt for decades — filed for Chapter 11 personal bankruptcy, a transparent attempt to make it harder for families he smeared to collect a substantial share of the $1.5 billion defamation judgment they won earlier this year.

Jones, who’s gotten away with almost every vile thing he’s done and said in his 48 years, must not escape accountability this time.

Let’s repeat in plain terms what prompted jurors and a judge to order he pay a huge sum to the loved ones of first graders and educators murdered in 2012 at Sandy Hook Elementary by an unstable young man. Jones repeatedly called the massacre a whole-cloth hoax staged by nefarious forces, which is to say he called mothers and fathers enduring unimaginable grief actors who were gladly profiting from the experience. It is literally impossible to concoct a more nauseating lie.

Nor was it an idle falsehood. Jones’ followers proceeded to hound the people they were told were fabricators. They harassed and tormented them. They forced them to move. They turned what was already a period of awful anguish no human should ever have to endure into hell on earth.

Jones has been slithering away from having to pay any price for years. As The Washington Post reported last month, records show that when, in mid-2020, it started to look like there might be consequences for his vile lies, he started moving money into other companies controlled by himself, relatives or friends. And so, when his Free Speech Systems entered corporate bankruptcy in July, the very live and still unanswered question was where else in the woodwork he has bills rolled up and stashed. That is now underlined in light of his attempt to restructure his personal finances.

Reality might finally bite Alex Jones. It must leave a mark.