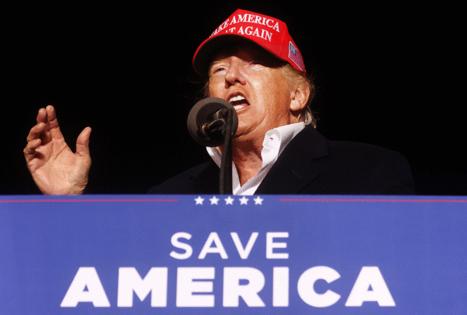 FORT WORTH. Texas — I spent the better part of a recent Saturday morning locked in an intense text-message debate with a dear friend.

The topic was Donald Trump’s recent decision to run for re-election.

And the interaction was probably not unique among conservative friend groups these past several weeks — for that matter, the last several years.

That is to say, it wasn’t particularly productive.

We “talked” over each other — she still an avid Trump supporter, I in disbelief that after the November midterms, anyone could continue to hitch their wagon to Trump’s star.

Trump’s undisciplined, I said. He’s a political outsider, she said.

And the conversation continued along predictable lines.

As I tried to explain, my worries about Trump ran a lot deeper than the GOP’s pitiful performance in the last nationwide election.

From the very beginning — aside from what seem now like pedestrian concerns about Trump’s character and temperament — my worries about his leadership were mostly focused on the impact his candidacy and presidency would have on the future of political conservatism.

I worried that his populism, celebrity persona and “fair-weather” conservative politics would ultimately form cleavages on the political right, so deep, that onetime political allies would forever find themselves divided.

Conservatives would be choosing sides over a man — which I view as fealty — instead of the political ideology he was supposed to represent.

We’ve seen that on the national stage, as Trump and his allies cannibalized any Republican politician who opposed or criticized him, even if they generally supported his policies.

But I was concerned about how this phenomenon would materialize within local parties and especially among family and friends.

Mid-way through my text debate, my worries proved prophetic.

My friend and I weren’t talking about policy or even party ideals — smaller government, less regulation, policies to assist and encourage families — we were arguing about Trump, why I disliked him and why he shouldn’t (or should, in my friend’s view) be the individual to carry the banner for the party.

To me, the reasons for dumping Trump seemed obvious.

Even if his personal shortcomings could be overlooked (and writers of all political stripes have detailed why they can’t), he has proven to be a vote repellent.

Most of the conservatives I’ve talked to, the ones that voted for him in the past, say they would not do it a third time.

To my friend, though, acknowledging this reality was just parroting talking points from media she doesn’t trust.

My criticism of him was personal, and she agreed that as an individual he is flawed.

But even I had to acknowledge the good he accomplished as president, like his record on conservative judicial appointments.

When Trump was president, she argued, we all won.

There wasn’t really anything either of us could say to change each other’s mind. And so we left it at that.

But it struck me how far afield conservatives have become in the Trump era.

Several nights later, my family sat around the kitchen table playing Hoot, Owl, Hoot – a game we purchased several years back when we were trying to teach our eldest child about how to win or lose well.

It’s a cooperative game, not a competitive one.

All the players have the same objective, to get all of the owls home before the sun rises. None can achieve it without the help of the others. Everyone wins or everyone loses.

A typical first born, my daughter hated it at first.

It took her years of playing to appreciate how she had to unite the team’s goal with her own; to set aside her personal desire to win and see her fellow players as teammates, not adversaries.

And as we played, I couldn’t help but think about my friend and the cause of conservatism at large.

The Trump era has done some strange things to the conservative movement.

Winning has become personal instead of collective, which means, in the realm of politics, that most of us lose. If the November midterm election results aren’t evidence of that, I don’t know what is.

But the solution isn’t to double-down on the same futile arguments we’ve been having for years.

It’s going to require humility from all parties. And to be trite, a gentle reminder that our objective is the same, if only we would unite our team’s goal to our own.