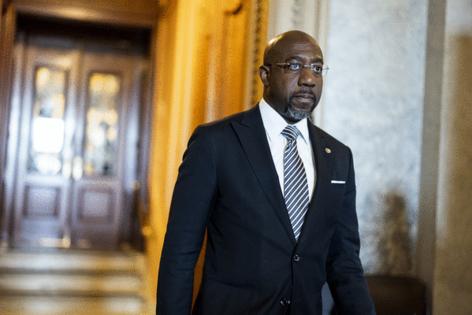 Sen. Raphael Warnock of Georgia works out of the Russell Senate Office Building, the oldest and most imposing of the Capitol buildings housing senators and staff. Built on a granite base with marble and limestone facing, the Russell’s high-ceilinged, Beaux Arts corridors have the feeling of a Parisian boulevard — broad, grand, powerful.

The building, completed in 1908, was named 50 years ago last month for another Georgian, Democratic Sen. Richard Russell. Whether 1972 is a lifetime ago (the median age in Georgia is 37) or a recent moment that still shapes American politics (more than 1 million current Georgians were adults when the building was named) is a complicated question. That Warnock, a Black man, serves Georgia in the U.S. Senate suggests one kind of answer. That he works in a federal building named in honor of a white supremacist suggests another. That his Republican opponent is at once Black and buffoonish seems to cut both ways, doesn’t it?

Russell was not a racist cartoon character come to life. As his biographer Gilbert C. Fite wrote: “Unlike some of his colleagues, especially Theodore Bilbo of Mississippi, Russell did not deliver racist diatribes. His tone was moderate, and he never said anything malicious about blacks.”

Yet Russell’s malice was no less pointed. He pursued the same ends as Bilbo and other Foghorn Leghorns. Known for diligence, intellect and persuasion, Russell deployed those qualities in a decadeslong defense of American apartheid.

Russell managed to remain committed to white supremacy while somehow denying — to the public and perhaps even to himself — that he was a racist. In the midst of a fight to block anti-lynching legislation, he said: “There are no members of the Negro race in my state tonight who would say that any official or personal act of mine had resulted in any unfairness to the Negroes.”

Was it unfair to keep Blacks in inferior schools and out of any clerical or administrative posts in the federal government? Apparently Russell didn’t think so. Was it unfair that Blacks had only as much access to justice as any group of racist local whites felt like affording them in a given moment? The anti-lynching law, Russell said, would lead to “vital blows at the civilization of those I seek to represent.”

Russell, an expert both in national defense and in funneling military contracts to his home state, wasn’t a complete reactionary. He came to Washington in 1932, shortly before Franklin Roosevelt moved into the White House, and he vigorously supported most of the New Deal, including the Emergency Banking Act, the Tennessee Valley Authority, the National Industrial Recovery Act and the Civilian Conservation Corps. He admired and supported Roosevelt while blaming Roosevelt’s wife, Eleanor, for encouraging Blacks to rise above their station.

As the civil rights era unfolded, Russell engineered the South’s strategy of “massive resistance” in the Senate. He battled Harry Truman’s integration of the U.S. Army, fought to maintain poll taxes to disenfranchise Black voters, lamented school desegregation and waged war on every piece of civil rights legislation, including the landmark bill that finally broke the Southern blockade in 1964.

Some of his tactics have legs. In 1949 he introduced a bill to redistribute Southern Blacks throughout the U.S., aiming to expose white civil rights supporters as hypocrites who wouldn’t want Blacks in their own states. You can see a similar malice in the efforts of Republican governors from Florida and Texas to send undocumented migrants to Democratic-led states. Likewise, Russell’s whining about the oppression suffered by his white constituents is now a staple of MAGA rhetoric. White Southerners, Russell said, were “the most despised and mistreated minority in the country.” The biased Northern media, he complained, were poisoning American minds against the noble South.

None of this racial grotesque prevented Russell from being so admired by his colleagues that, even eight years after he rallied opposition to the Civil Rights Act, they named the Senate’s grandest building after him. Would such an honor be bestowed on any Black American who spent a lifetime attacking white people? The question is absurd.

After Republican Sen. John McCain’s death in 2018, Senate Democratic leader Charles Schumer suggested renaming the Russell building after McCain. A former Russell aide responded by saying that it would be “unfair” and “irrational” to let Russell’s record on race overshadow his accomplishments.

The comment captures something about America’s sputtering journey to multiracial democracy. Advancing white supremacy is now widely (though not universally) acknowledged as an unfortunate use of political power. But it’s not yet considered disqualifying for a national honor.

So for now, a Black senator from Georgia continues to work in a building named for a white supremacist from Georgia. America will get another reading on the health of its democracy when one, or the other, is removed from the building.