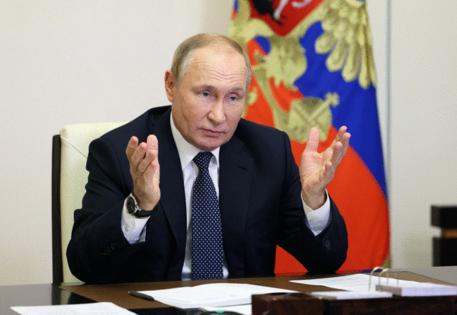 Imagine if Philadelphia were totally blacked out for a dozen hours daily, with no water or heat and no electricity or cell phone coverage. Imagine if Philly high-rise apartment dwellers, including the elderly and moms with babies, had to lug water and food to upper floors because the elevators weren't working. Imagine if surgeons at local hospitals had to operate by generator, and cars had to drive in total darkness while pedestrians navigated by flashlight.

This is the situation in Ukraine's major cities, including the newly liberated city of Kherson, as Russian missiles pound civilian electrical grids and power stations in an effort to freeze citizens into capitulating. Russian officials baldly insist these missiles are aimed at military targets, even though the world can plainly see they are lying.

These missiles are the latest phase of Vladimir Putin's genocidal effort to destroy the Ukrainian state and absorb its remains into Russia. Having lost military momentum, Putin is taking his revenge on the Ukrainian people — trying to freeze and starve much of the population into fleeing the country or pressuring their leaders to accept Russia's terms.

The United States and Europe (and Israel) could stop Putin's murder from the air. The Western allies have the advanced air defense systems Ukraine desperately needs — notably Patriot missile defense systems. Yet they are still holding back.

What are they waiting for? Will the West, and Israel, permit another genocidal killer to succeed in Europe in 2022?

I am usually wary of using the word genocide because I associate it with the Holocaust and the effort to physically wipe out a single religious or ethnic group. But, after covering conflict for four decades and making two trips to Ukraine this year, l feel this term is appropriate when it comes to Putin and his imperial war.

It's not just that last weekend was the 90th anniversary of Ukraine's Holodomor — meaning "death by hunger" — in a Soviet-orchestrated famine. From 1932 to 1933, as many as four million Ukrainians starved to death when Soviet dictator Josef Stalin forced unwilling farmers into collectives and seized their food and possessions while sending their grain harvest to Soviet cities.

Ninety years later, Putin insists that Ukrainian statehood is a fiction and that the country belongs to Russia. He is willing to bomb the country into the Stone Age and kill, starve, or drive out much of its population in order to make his fantasy come true.

So President Joe Biden was spot on when he said at the U.N. General Assembly in September, "This war is about extinguishing Ukraine's right to exist as a state, plain and simple."

That fact is hard to grasp until you see firsthand the way the Russian military operates in Ukraine.

Having failed in its plan to quickly overthrow the Ukrainian government in Kyiv and install a puppet regime, the Russian military opted for mass terror and destruction. Every city it has occupied has been brutalized, including those in the four regions Russia "annexed" via fake referendums. Murder, torture, rape, suppression of the Ukrainian language, are the norm of Russia's military game.

The vibrant city of Mariupol that I visited in February simply doesn't exist anymore. In villages I visited from which the Russian army was forced to withdraw, every cottage was targeted as Russian troops departed. In a sickening pattern, schools, hospitals, universities, and apartment buildings in unoccupied cities such as Kharkiv and Chernihiv were deliberately bombed into rubble.

If you dismiss all this as the normal casualties of war, you should listen to the most popular talk shows on state-controlled Russian TV. (Kudos to @JuliaDavisNews on Twitter, who watches and translates the vitriol.) The best-known hosts and their guests talk gleefully about destroying Ukrainian infrastructure and killing Ukrainian "Nazis" or drowning their children. Their vile proposals make Fox News' Tucker Carlson look cuddly.

This week, TV host Sergey Mardan and a guest casually discussed why Ukraine should be erased from the map and "not even a memory left of it." Mardan was smiling most of the time.

"It would be much more peaceful for everybody if Ukraine did not exist," Mardan insisted. An "empire" of Russia's size, he continued, "has to bring into submission or pacify the barbarians we are surrounded with." This is the kind of propaganda that most Russians listen to daily since most of the public gets its news from TV.

So there are no boundaries to the destruction that Putin is willing to rain down on Ukraine's population. After all, he has appointed Sergei Surovikin, nicknamed "General Armageddon" by the Russian media for his ruthlessness, as Moscow's top commander. Surovikin was responsible for the mass murder of Syrian civilians from the air in 2015.

Given these genocidal realities, I ask again: Why is the West still hesitating on giving Ukraine enough advanced air defenses? On Tuesday, Pentagon press secretary Brig. Gen. Pat Ryder told reporters that the U.S. has "no plans to provide Patriot batteries to Ukraine" right now. True, the Ukrainians would need training, but they have proved masterful at adopting Western technology (and training could have begun months ago).

Meantime, Germany has proposed to send some Patriot systems to protect Poland's border with Ukraine, but Polish leaders have suggested they be sent to Ukraine where they could protect both countries. No takers in Berlin.

More than a dozen other U.S. allies have Patriot systems, but none has been pressed to lend them temporarily to Ukraine.

Certainly, Patriot systems are needed more than the negotiations that French President Emanuel Macron urged again to Biden during his state visit to the White House on Thursday. Any negotiations would be fruitless with a genocidal killer who wants to destroy Ukraine.

At a meeting on Tuesday, NATO foreign ministers focused on sending transformers and generators to help Ukraine restore its electrical systems. That's great, but as Ukrainian Foreign Minister Dmytro Kuleba pointed out, if Kyiv receives sufficient air defense systems, "we will be able to protect this infrastructure from the next Russian missile strikes [which are] definitely to come."

"In a nutshell," he added, "Patriots and transformers are what Ukraine needs most."

So again, as Putin readies more missiles, what the hell are we waiting for?