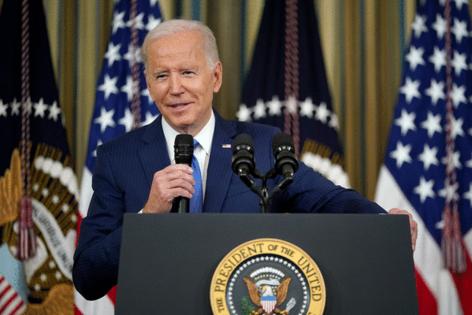 The archaic phrase "lame duck Congress" connotes a limping, limited thing. Yet the current postelection session is poised to prove anything but.

The reason for this one's productive potential? With the midterm elections behind them, House members and senators — including dozens of individual lame duck legislators either defeated or retiring — feel freer to vote as they choose, regardless of their constituents' wrath.

That's actually a good thing in these polarized times, not an anti-democratic impulse. We need bipartisan majorities of lawmakers less beholden to the demands of the noisy fringe of their respective political tribes and more responsive to the broadly defined desires of the American people.

In fact, the real limping, limited Congress is the one that convenes on Jan. 3 when a narrow Republican majority takes control of the House. Its enlarged right-wing fringe will lead us into what is likely to be two years of legislative near-paralysis.

The time for constructive governance is now: March on, lame ducks.

Perhaps the best example of the productive dynamic at work is the Respect for Marriage Act, putting nationwide recognition of same-sex marriages on the federal law books. Congress will send a compromise bill to President Joe Biden for his signature once the House, still under Democrats' control, approves the version that the Senate passed on Tuesday by a bipartisan 61-36 vote. That was just one more yea than needed to avoid a filibuster by the Senate's right-wing culture warriors.

For months enough Republican senators had indicated support to pass the same-sex marriage legislation. Yet fearful of their party's anti-gay-rights base, they persuaded Democratic Senate leaders to delay votes on the bill until after the midterm elections. Democrats agreed, passing up an opportunity to put Republicans on the spot over an issue that up to 7 out of 10 Americans support. As the timeworn question goes on Capitol Hill, do you want the bill or just a political issue to flog? Democrats decided they wanted to make law, despite some grumbling from the left.

That the bill was deemed essential at all owes to widespread fear of the right-wingers running the Supreme Court. Not content with overturning Roe v. Wade after a half-century, Justice Clarence Thomas has indicated that the court should also "correct the error" of its 2015 ruling that same-sex marriage is a constitutional right. While the bill stops short of codifying that right, it mandates that — should Thomas ever get his unpopular way — same-sex marriages performed in a state where such ceremonies remained legal must be recognized even in states where they're banned.

For pro-labor Democrats, this postelection period has proved conducive to their going along — if reluctantly — with Biden's call to impose on balky rail unions the contract that the administration brokered in September. In back-to-back votes Wednesday and Thursday, first the House and then the Senate voted with rare speed and bipartisanship to put the contract into force, just a week before a strike deadline that would have halted the rail lines and commerce.

Some rail workers had held out for more guaranteed days of paid sick leave, and many pro-union Democrats in Congress supported them, along with a few conservative Republicans eager to newly position theirs as the party of the working class. But once again a lame duck bipartisan majority proved more willing than usual to stand up to special interests.

Even Congress' typical eleventh-hour budget brinkmanship might turn out better than expected. There's still no agreement on spending bills for a fiscal year that's already 2 months old, and without passage by Dec. 16, the government must shut down. But after a White House meeting this week, the leaders of both parties committed to trying to pass a full-year package rather than a stopgap measure that would punt the final spending decisions into 2023.

Whether they succeed remains to be seen, but the motivation is there: Democratic and Republican leaders alike are pessimistic that a Republican-run House can pass much of anything next year beyond resolutions to impeach Joe Biden and investigate his son Hunter.

Meanwhile, either the spending bill or another priority — a must-pass bill authorizing defense programs — could be the vehicle to carry other vital legislation: relief for areas hit by natural disasters, further aid to Ukraine and a tightening of a 1887 elections law that Donald Trump and his would-be coup plotters misconstrued on Jan. 6, 2021.

As with the same-sex marriage bill, bipartisan legislation revising the 19th century Electoral Count Act wasn't politically possible before the midterm elections and wouldn't be once Trumpian Republicans are in charge of the House schedule in four weeks. The time is now, both to clarify that a vice president cannot unilaterally throw out states' electoral votes, and to raise the number of votes needed in Congress to contest any state's electors.

Election deniers' ongoing fights in Arizona and Pennsylvania over those battleground states' recent election results underscore the need for action. And as conservative former federal judge J. Michael Luttig told me recently, Trump and his allies remain "a clear and present danger" headed toward 2024.

Enjoy these few weeks of what passes for bipartisanship as Congress waddles to its end. You won't be seeing much of that over the next two years.