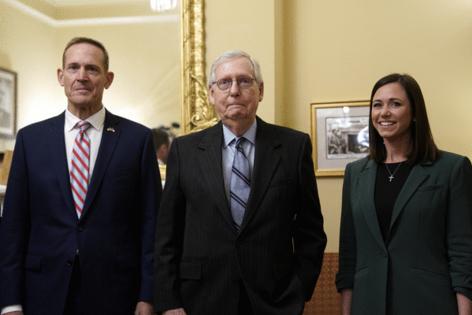 A favorable map. Media narratives dissecting the uphill climb for Democrats. A Senate majority within sight.

But Republicans underperform and fail to win the Senate. A postmortem is ordered by the Republican National Committee.

If it feels like history is repeating itself, that’s because it is.

In 2012, the Republicans had everything going for them heading into the election — just as they did in 2022 — until the candidates who won primaries started talking, and it all went south.

Indiana Republican Senate candidate Richard Mourdock referred to a women getting pregnant during a rape as something “God intended.” Mourdock lost the election to Joe Donnelly, a red-to-blue pickup for the Democrats. In Missouri, Republican candidate Todd Akin claimed that it’s very rare for women who are the victims of “legitimate rape” to become pregnant. Claire McCaskill, the Democratic incumbent senator, sailed to a second term. In Ohio, the tea party celebrated its primary victory with Republican candidate Josh Mandel, only to watch him fall to Democrat Sherrod Brown.

It doesn’t take much to figure out what went wrong for Republicans in 2012: They nominated far-right candidates who alienated themselves from the largest constituency of voters in America — women — and were unable to make inroads with minorities and younger voters.

And yet, the RNC, puzzled by the outcome, commissioned a report that was based on 52,000 contacts made. The conclusion: “The GOP today is a tale of two parties. One of them, the gubernatorial wing, is growing and successful. The other, the federal wing, is increasingly marginalizing itself, and unless changes are made, it will be increasingly difficult for Republicans to win another presidential election in the near future. ... Young voters are increasingly rolling their eyes at what the Party represents, and many minorities wrongfully think that Republicans do not like them or want them in the country.”

This year, Republicans have made restricting women’s reproductive rights and bodily autonomy the hallmark of their campaign while doubling down on the immigrant invasion narrative. Not shockingly, this wave of extremism was rejected by voters in the battleground states.

Yet just as in 2012, the Republican Party seems unable to comprehend what went wrong. On Tuesday, it ordered up a postmortem to examine this month’s big disappointment.

This time, the review will be spearheaded by a “Republican Party Advisory Council” featuring Kellyanne “alternative facts” Conway and failed Arizona Senate candidate Blake Masters. The inclusion of such propagandists and election deniers immediately undermines the integrity and usefulness of such a project.

If the Republican Party wants to waste time, energy and resources to assemble a report full of lies, distortions and flat-out bad political advice, have at it. Keep learning the wrong lessons from failure and keep losing winnable elections.

At this point, failure after defeat is a pattern. All evidence points to the Republicans having no interest in breaking the cycle. In the aftermath of their midterm underperformance, they have declared their intention to launch a series of witch hunts targeting Biden’s family and allies, returned to using the border as a scare tactic, and are now busy trying to navigate a response to Donald Trump having dinner with a white nationalist and an antisemite. And of course, fighting among themselves over who will lead them in the House.

Does any of this sound like a political party that is taking failure seriously?

Trump wasn’t the cause of this rot in the GOP; it was there years before he came down that escalator to announce his candidacy for president, and it’s still there two years after he lost. The difference now is that racism, misogyny and conspiracy theories are accepted as part of the agenda. You can see it in virtually every sound bite, every tweet, every policy.

For years, the political and media class has been waiting for the moment when Republicans snap out of it — when losing election after election pulls them back to reality and away from the fringe.

The 2012 GOP autopsy noted ruefully, “devastatingly we have lost the ability to be persuasive with, or welcoming to, those who do not agree with us on every issue.”

A decade later, nothing has changed, and it’s not going to. That’s not a prediction, it’s a spoiler.