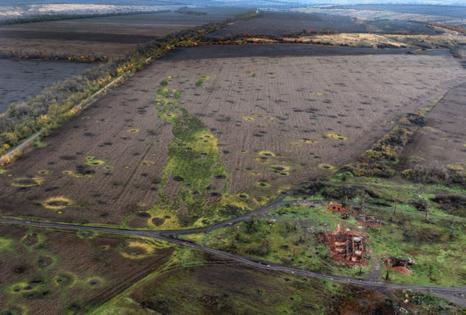 The strategically vital city of Kherson is back in the hands of Ukrainians, albeit under threat of Russian shelling and attacks on its electricity supply. But as combatants on both sides of an increasingly static firing line prepare for winter war, there are effectively two separate conflicts emerging: one on the land, the other in the air. What can the West do to help Ukraine meet the immediate tactical challenges, and ultimately seize the longer-term advantage?

On land, the arrival of a wet, rainy fall and a harsh winter will lead to a decrease in operations. Both Russia and Ukraine need to rest and reinforce their troops, as well as repair equipment. A return to full-blown combat operations isn’t likely until late winter when the ground freezes, presenting a better opportunity for the heaviest equipment.

Russia will particularly struggle to fill the holes in its forward combat operations, thanks to low motivation and a failing draft. As 200,000 to 300,000 young men — under threat of conscription — have departed Russia for sanctuary in bordering nations, Russian president Vladimir Putin has resorted to conscripting criminals, the homeless and drunks rounded up in bars. Ukraine faces challenges too, but not of motivation — its citizens, fighting an existential war, are mighty motivated. The Ukrainian challenge stems from having a far smaller population — only about a third of Russia’s.

Ukraine will also have a major advantage in supplies. The West will continue to provide not only the high-tech weapons that receive most of the publicity but also the bread and butter of infantry operations: guns, mortars, ammunition, fuel, trucks, night-vision devices, cold weather gear, portable stoves, point-to-point communications equipment. In contrast, Russian conscripts have been told to find their own sleeping bags and improvise bandages from tampons.

But the challenge in the land war will be a classic military fact of the battlefield: Advantage in ground war accrues to the defensive side. Military theory says you need a 3:1 advantage on offense to conquer a well-dug in defense. Ironically, as the Ukrainians succeed in taking back big chunks of previously conquered territory, the Russian defensive positions compress and become harder to overrun. But given Ukrainian advantages in materiel and motivation, I’d rather have their hand of cards.

So the land war advantage goes to the Ukrainians, although the fighting will be hard. But what about the other war, the one in the sky?

In the air war over Ukraine, the advantage accrues to the Russians. First and foremost, they have a vastly larger air force, one that has seen significant combat experience in Syria. Russian air forces routinely pounded Syrian cities into dust, dropping indiscriminate “dumb bombs” by the thousands, seeking to simply destroy any support for the rebels fighting Putin’s ally Bashar al-Assad.

Sadly, this carpet bombing proved very effective, and Putin seems inclined to try and copy it in Ukraine. The new general appointed to oversee the Ukraine war is the leader of Russia’s air force, a man known for his Syrian atrocities. The strategy is simple: Grind down the Ukrainian electric grid and water distribution system to break the public’s morale by literally freezing them out of their increasingly uninhabitable homes.

While Putin’s stocks of precision-guided missiles are rapidly depleting (witness his turning to Iran for high-tech weapons), he still has plenty of dumb bombs, stockpiled for decades going back to the Cold War. Because he doesn’t care about collateral damage or civilian deaths, he will try to kill as many as he can from the skies.

As the reality of his approach sinks in, the West must increase its support to Ukrainian air-defense efforts. Ukrainian President Volodymyr Zelenskyy, of course, desires a NATO no-fly zone above all else. He often implores the West to “close the skies” of his nation. More likely, he will receive increased numbers of high-end air-to-surface missiles systems like the superb Iron Dome (developed jointly by the U.S. and Israel), NATO Patriot batteries (that are also going along the Polish border), and possibly tactical fighters.

Leaders in NATO capitals are also revisiting an idea that was discarded in the early days of the war: providing either MiG-29 Soviet-era fighters (the Poles have offered to transfer them to the Ukrainians) or even U.S. surplus F-16s, a simple-to-learn multi-role fighter. Without such measures, the air war will continue to go in favor of Putin.

With a land war favoring Ukraine and a brutal air war favoring Russia, the West’s best option will be to significantly increase its assistance to Ukraine on the air war side of the conflict. Giving the Ukrainians more tools to close their own skies may be the key to forcing the Russians to ultimately negotiate, perhaps as soon as early spring, given the success Zelenskyy and his military have achieved on the ground.