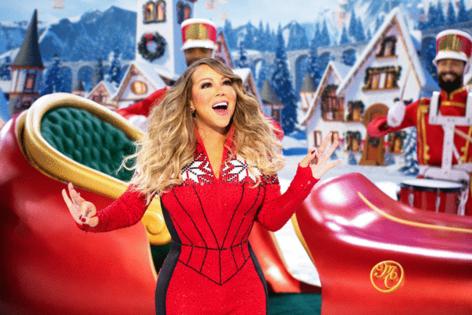 Carey’s application was denied, I presume on general principles, but my sources close to the U.S. Trademark Trial and Appeal Board (snort!) indicate she was offered several consolation titles they would not disclose. Dame of Fame? Countess of Crass? Duchess of Sparkle Season? I know. Lady Mistletoe.

Anyway, there’s been no word on whether any of those will help Carey hawk her makeup, perfumes, clothing, jewelry and dog toys or if she’ll just have to slog along singing for her supper.

This insignificant slice of uniquely American nonsense boiled up from the staggering success of “All I Want For Christmas Is You,” a certifiable dud when it was released in the mid-'90s but a powerhouse Christmas staple since turning up in the beloved ensemble film “Love Actually” (2003), selling a bajillion and one copies.

If nothing else, it’s a contributing factor to the fact we’re not to December yet and I’m already sick of Christmas music.

Plenty are to blame for this unfortunate condition, not excluding my own self’s terminal crotchedy-ness, and certainly not excluding Costco, where the Christmas decorations went up in, I think, August of 2021, and where I swear I heard “I Want a Hippopotamus For Christmas” the day before Halloween.

Now that we’re fully cornered in a musical climate where you can barely pump a full tank of gas without hearing Tchaikovsky’s Nutcracker riffs from 1892 leaking through the outdoor speakers (the way it was meant to be presented, I’m sure), I want to be on record as saying that not all Christmas music is annoying. Some is just bad.

Paul McCartney’s “Wonderful Christmastime,” for example, was better left unwritten, as was “A Holly Jolly Christmas,” anything by or including the Chipmunks, Wham’s ridiculously popular “Last Christmas,” and the aforementioned Hippopotamus opus, although big props to this seasonally enchanting lyric:

“Mom says the hippo would eat me up but then

“Teacher says a hippo is a vegetarian.”

Dylan only dreams he’d written that.

Some Christmas music is so bad it’s good, like Elvis’ “Blue Christmas,” with a lead vocal so unapologetically Elvis it hurts and a cadre of backup singers clearly on a dangerous mission. Still, “Blue Christmas,” goes into the modest collection within the canon that I like, along with Vince Guaraldi’s score for “A Charlie Brown Christmas,” particularly the all-instrumental version. Also on this relatively short list of pleasing holiday songs is John Lennon’s “Happy Christmas,” Brenda Lee’s “Rockin’ Around the Christmas Tree,” and, of course, the greatest Christmas song of all time, Chuck Berry’s “Run Run Rudolph,” or officially “Run Rudolph Run.”

I’m pretty sure Chuck Berry never petitioned the U.S. Trademark Trial and Appeal Board to be known as the king of anything, but I’m pretty sure they’d have granted it by acclimation, particularly King of Rock ‘n’ Roll. Though Elvis wore this crown, the title was literally fought for between Berry and Jerry Lee Lewis, who died in October.

“He whupped my butt,” Lewis said in several interviews over the years. “He said he was the king of rock ‘n’ roll and I said I was. And he said he was and he proved he was. I don’t argue with him no more.”

Lewis further quoted his own mother on the matter:

“Now you and Elvis are pretty good, but you ain’t Chuck Berry.”

In “Run Rudolph Run,” Berry at the apex of his powers shows again what an underrated lyricist he was. The man wrote things to fit his original rhythms that would not occur to another human being.

“Out of all the reindeers, you know you’re the mastermind,” is his opener, followed with “Run run Rudolph; Randolph ain’t too far behind.”

OK, stop. Who is Randolph?

You know Dasher and Dancer and Prancer and Vixen, Comet and Cupid and Donner and Blitzen, but Chuck Berry knew Randolph.

He further knew, despite no one having previously made this assumption, that Santa should use the freeway.

“Santa, make him hurry, tell him he can take the freeway down.”

From the moment Berry released that Christmas version of his bedrock 12-bar blues in 1958, all other Christmas songs have been playing for second place.

To make sure I had the right inflection for “Out of all the reindeers, you know you’re the mastermind,” I asked Alexa to play it for me the other day, but since she’s tired of my song choices, she agreed only to shuffle “Run Run Rudolph” and “similar songs from Amazon Music.”

So I heard “Run Run Rudolph,” from the King of Rock ‘n’ Roll and then, seconds later, I heard “All I Want For Christmas Is You,” from not the Queen of Christmas.

Alexa I have absolutely had it with you; those are NOT similar songs — all I want for Christmas is for you to give it a rest with Mariah Carey!

Seems we always argue around the holidays.

It's almost the end of my first Dry January, and I am happy to report — as if you didn't already know — that it's possible to stop drinking even when you think you can't.

Over the years, for fairly mundane reasons, I ...Read More

Pennsylvania’s costly, ineffective and immoral death penalty statute remains active, even though the state hasn’t executed anyone since 1999. With more than 100 prisoners on death row, one of the nation’s largest, ...Read More

On Jan. 7, Memphis police officers stopped 29-year-old Tyre Nichols for a traffic violation and then beat him so viciously that he was hospitalized and died three days later.

The videos of Memphis, Tennessee, police pulling Tyre Nichols from his car and beating him show a gratuitous and vicious assault on an unarmed motorist who appears to try his best to cooperate. There are also things the ...Read More

The Biden administration announced last week that the U.S. will provide 31 Abrams M-1 tanks to Ukraine, and Germany said it will send 14 of its Leopard tanks to Kyiv.

The tank deal and the first anniversary of the start ...Read More

On Thursday, the State Bar of California announced that it was initiating disciplinary proceedings against Donald Trump’s lawyer John Eastman and seeking his disbarment for his role in efforts to overturn the 2020 ...Read More