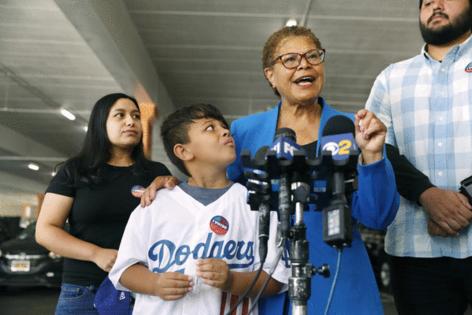 While the ethnic breakdown of the vote is still forthcoming, Bass' strong performance after election day suggests that Latinx voters, who tend to cast their ballots closer to election day, favored her more than expected. They helped her leap from 2.5 percentage points behind billionaire developer Rick Caruso to an insurmountable double-digit lead.

Caruso did have a certain appeal among Latinos impressed by his showy Catholicism, his riches and family immigration story. Drawing from more than $100 million in personal campaign money, he invested in Spanish-language ads and visited Latino neighborhoods. Many polls showed Latinos favoring him as in the primaries. But that may have reflected his early name recognition more than his actual allure.

In the end, Caruso failed to convince enough Latinos that he's one of them, despite his claims of being "Latin" because of his Italian heritage.

Instead, the city with the largest Latinx population in the U.S. elected Bass, who is Black, as its first female mayor at a time of high-profile Black-brown tension in the halls of power. Bass, whose family is Black and Latinx, never posed as a Latina. But many Latinos rightly saw her as a truer ally than Caruso.

Bass has been building Black and brown coalitions for decades. In 1990, she founded Community Coalition, a Black and Latino nonprofit based in South L.A., in response to surges in crack cocaine addiction and violent crime. A former nurse and physician assistant, Bass saw the problems as health and economic issues that required policies addressing a lack of jobs and basic resources.

"Even in these difficult times when race relations were placed under the microscope due to the recordings of City Hall members," incoming City Councilmember Eunisses Hernandez told me, "there's a desire to unite and to stand behind a candidate that all communities felt connected to." Hernandez defeated the now-disgraced Councilmember Gil Cedillo in the June primary, before the release of audio from his inflammatory conversation.

Latinos in L.A. have experience with Black leaders who fight harder for them than others. One of the strongest advocates for undocumented Angelenos, who include some of the most marginalized Latinos, is City Councilmember Curren Price, who is Black. Latinx underrepresentation in politics has raised questions about whether he's the best leader for his district, which is about 80% Latino. But as one supporter told me: "Being Latino doesn't necessarily mean being fierce on Latino issues."

The need for Latinx representation is substantial and urgent. But Latinos shouldn't view their own empowerment in opposition to Black power, as did City Councilmembers Nury Martinez, Kevin de León and Cedillo in that despicable recording. Doing so would be self-defeating.

Bass' win reflects a city that understands we're stronger united. And her Latinx appeal may reflect a reinterpretation of identity politics among Gen Zers and millennials who understand that a person's race or ethnicity is important but isn't everything.

Defining identity politics in 1977, the Black lesbian socialist Combahee River Collective stated: "The inclusiveness of our politics makes us concerned with any situation that impinges upon the lives of women, Third World and working people." As an example of a situation meriting protest, the members cited the exploitation of immigrant women.

Coalitional thinking, embodied by Bass' career, is a threat to white extremism, which needs all groups to see themselves as separate. In the digital sewers of white nationalist publications, Black-brown conflict is celebrated. One such publication that was influential with Trump administration leaders, "American Renaissance," has a whole section tracking "Blacks Versus Hispanics," lately focused on the L.A. City Council scandal.

The architects of the growing U.S. white nationalist movement delight in Black-Latino tensions because they understand their agenda can't succeed without Latinos embracing white supremacy and identifying as white. "Hispanics are great allies in resisting black demands," read one article titled "Hispanics Will Not Join a Black/Brown Coalition."

The hatemongers are wrong. Per the 2020 census, the share of Latinos who identify as white is falling – a trend that may reflect a rising identity as people of color in solidarity with Black, Indigenous and other groups.

The increasing visibility of Black Latinos is also helping. Earlier this month, Maxwell Alejandro Frost, a 25-year-old Afro-Cuban and Democrat in Florida, became the first member of Gen Z to be elected to Congress.

In L.A., growing Black-brown solidarity has been evident in the Latinx calls for resignations from city leaders heard in the racist conversation. It's evident in the most popular chant from protesters at City Council meetings directed at those leaders — Spanish for "get out": Fuera!

This strongly multiracial, multilingual rejection of anti-Blackness helped contain the fallout from the shamed leaders' vitriol. A different result would have brought immense joy to white supremacists.

Bass' victory is the reassurance our city needed, showing that Los Angeles, which is so deeply Latinx, can be a beacon against bigotry.