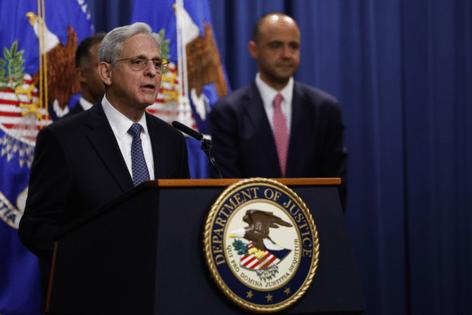 To no one’s surprise, Attorney General Merrick Garland has appointed a special prosecutor, Jack Smith, to investigate former President Donald Trump. You might think that you’ve seen this movie before. But there’s little reason to think this will be a repeat of the Robert Mueller investigation that declined to bring charges against Trump. Charges are more likely this time around — though that doesn’t guarantee they will stick.

Remember how worried we were about whether special counsel Mueller would be fired? And remember how then-Attorney General William Barr subverted Mueller’s report by misrepresenting its contents in advance of its release?

Garland is no Barr. He will respect the special counsel’s independence. It would be almost impossible for him to insist on prosecution if Smith judged it inappropriate. And it would be astonishing if he blocked charges that Smith wanted to bring. Either method of contravening the special prosecutor would politicize the prosecution decision. Garland’s whole emphasis at the Department of Justice has been to restore the department to its traditional (and desirable) status as nonpartisan.

Smith is by all accounts a straight shooter, free of partisan bias. He won’t be afraid to charge Trump with federal crimes if the evidence supports it. That’s bad news for Trump. Especially because, with respect to the classified documents Trump took from the White House to Mar-a-Lago, it already seems clear there is enough evidence for criminal charges.

Trump could claim that the courts should block criminal charges against him while he’s running for office. (If elected and sworn in, he could then dismiss federal charges against himself.) While the justices might be sympathetic to that argument, there is no Supreme Court precedent that would definitively win the case for Trump. The court has never held that a sitting president can’t be prosecuted, much less a candidate. His argument would have to focus on the way the court has historically weighed the costs and benefits of civil suits and subpoenas against a sitting president — and would have to extend those concerns to candidates.

To simplify, Trump’s best argument would be that it’s bad for democracy if the sitting president could order criminal prosecution of one of his leading opponents. To see why this isn’t preposterous, run the thought experiment of asking yourself how you would have felt if Trump’s Justice Department had charged Joe Biden with a crime during his 2020 presidential run, say for conspiring with his son, Hunter, in connection with Ukraine. The charge would have been weak; but it would have been extremely difficult for Biden to run for office while defending himself against a criminal charge. Indeed, the very fact of criminal prosecution would no doubt have hurt Biden’s candidacy among some swing voters.

On the other side of the argument is the repeated insistence by the Supreme Court that even the president isn’t above the law. That principle permitted the criminal investigation and subpoenas of Richard Nixon while he was in office, and a subpoena of Trump’s financial records by the New York County District Attorney’s office while Trump was president.

If the president isn’t above the law, a presidential candidate shouldn’t be, either. What’s more, even a candidate who has been convicted and gone to prison can still run. Eugene V. Debs, who ran as a Socialist in 1904, 1908 and 1912, ran again in 1920 — this time from federal prison after his 1918 conviction under the Espionage Act on charges that today would be rejected as violating the First Amendment. Debs got nearly a million votes in 1920, 3.4% of the votes cast.

The Supreme Court’s conservative majority is far more loyal to its jurisprudential ideology than to Trump personally. It probably wouldn’t act to save Trump from prosecution out of any sense of obligation to him, especially if another Republican candidate, like Ron DeSantis, emerged as a viable alternative.

That said, the conservative justices will take seriously the concern about a president criminally charging the leading challenger. If Trump is at the front of the pack, it’s conceivable that they might suspend charges pending a full consideration by the court. That could delay the criminal process long enough for Trump effectively to be able to run without being required to defend himself in court.

And don’t rule out a surprise along the way: Trump might pull out a piece of paper and say he preemptively pardoned himself secretly while in office.