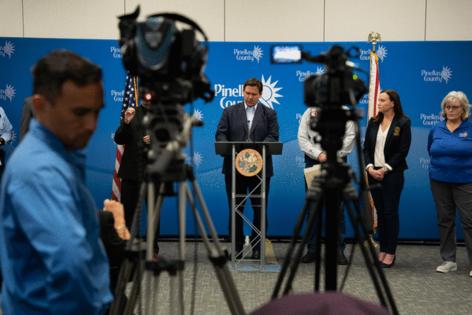 Ian displayed many of the characteristics scientists say climate change will bring — and already has brought — to hurricanes because of warmer ocean temperatures and increased moisture in the atmosphere. The storm intensified with alarming speed, its winds nearly doubling in 24 hours before landing on Florida’s west coast as a Category 4. These “rapid intensifying” hurricanes have accounted for 16 of the 20 hurricanes over the past two seasons in the Atlantic, The Washington Post reported. The storm surge DeSantis referred to is made worse by sea level rise.

The frequency of severe storms — Category 4 or 5 — has been on the rise since 1980, according to a New York Times analysis. The National Oceanic and Atmospheric Administration projects those powerful hurricanes will account for even more of our storms in the future because of climate change. Studies also suggest a 10% to 15% increase in rainfall related to hurricanes for a 2-degree Celsius global warming scenario, according to NOAA.

To sum it up: Climate change equals stronger, wetter storms. More people will lose their homes, power grids will be obliterated and more people likely will die — the death toll of Hurricane Ian surpassed 80 on Sunday. The state’s property insurance system will inch closer to a collapse as claims surge.

Yet you rarely, if ever, hear DeSantis utter the words “climate change.” ‘There are many Republicans who understand the gravity of this issue, but the GOP’s rising star looks at it as leftist agenda item.

“What I’ve found is, people when they start talking about things like global warming, they typically use that as a pretext to do a bunch of left-wing things that they would want to do anyways. We’re not doing any left-wing stuff,” DeSantis said last December during an event in Pinellas County.

Some will say that talking about climate change while places like Sanibel Island and Fort Myers are still assessing Hurricane Ian’s damage politicizes a disaster. We heard this after Irma and so many other hurricanes, only to see the can kicked down the road.

Florida leaders can walk and chew gum at the same time. They can provide immediate assistance while thinking long term. Tragedies of this magnitude call for swift reforms, much like the Florida Legislature made when it passed unprecedented gun control and school-security measures in the aftermath of the deadly Parkland school shooting.

Rather than debate climate change as a theory — and whether it’s even real — state leaders and our congressional delegation must come to terms with the fact we’re already living through this phenomenon. A “strong body of scientific evidence” shows that “it is unequivocal that humans have caused the Earth’s climate to warm, with a likely human contribution of 0.8 to 1.3 degrees Celsius to global mean temperature since the late 1800s,” according to NOAA.

“We need to acknowledge we have a problem,” CLEO Institute Executive Director Yoca Arditi-Rocha told the Herald Editorial Board. CLEO is a nonprofit dedicated to climate education, advocacy and engagement.

Florida has made progress since the days when then-Gov. Rick Scott banned state employees from using the term “climate change” in official communication. DeSantis and Republican lawmakers created a resiliency fund to help communities pay for projects to mitigate the impacts of flooding and sea level rise. He also appointed a chief resilience officer, though that position was vacant for 20 months before the appointment of Wesley Brooks last November.

These were historic moves, but only because Florida did so little before that. To date, there are no statewide plans to reduce greenhouse gas emissions or goals to transition to renewable energy. The glimmer of hope rests in local communities — 10 of them have committed to move to 100% clean energy, WUSF reported. Miami, for example, wants to achieve “carbon neutrality” by 2050. But the state government often is a barrier to such initiatives. For example, the Legislature banned local governments from controlling pollution from utilities.

Florida alone won’t solve climate change. But the Sunshine State is the second-largest consumer of electricity in the country, and 70% to 75% of it comes from fossil fuels, Arditi-Rocha said. Transitioning to renewable energy would be a “huge“ contribution to addressing the issue, she said.

While rooftop solar-power generation has grown in the past decade, it still runs up against the powerful lobby of Florida’s utility companies that want to maintain their monopoly on energy production. Florida Power & Light pushed a bill this year that would have curbed the expansion of solar, and we commend DeSantis for vetoing it. The company boasts about its investment in clean energy and solar farms, but climate advocates like Arditi-Rocha accuse FPL of “green washing” its efforts to obstruct green energy policy in the state.

What should Florida’s future look like? Ideally, the state would set a goal to curb CO2 emissions, every other home would have a rooftop solar panel. We would harness the power of wind. We would make saving future generations from the “biblical” destruction of hurricanes a principle that guides our government and the private sector.

Nothing will happen until more elected leaders utter these simple words publicly, again and again, and at the risk of sounding like a broken record: Climate change is here, and it’s making hurricanes stronger and more destructive.

Gov. DeSantis, it starts with you.