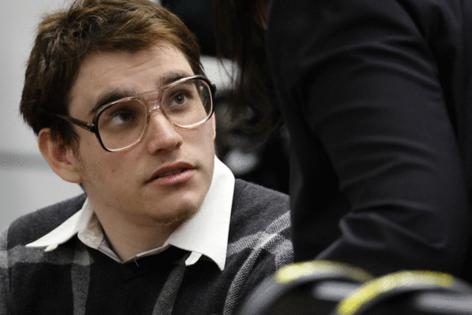 As the Parkland shooter’s sentencing trial uncovers chilling details about his life, including a history of skinning lizards alive as a child, jurors on Tuesday got a further glance at his troubled mind. Cruz drew swastikas on the magazines found in the AR-15-style semiautomatic rifle he used in the massacre and on one of his boots, Broward County Sheriff’s Office investigators testified. He made online searches on how to buy Nazi flags, about Adolph Hitler’s birthday and posted comments using a racial slur. He also wrote that “women are less important than a dog,” the Associated Press reported.

Prosecutors aren’t making the case that the shooting at Marjory Stoneman Douglas High School was motivated by racial or gender animosity. They are trying to convince jurors Cruz was driven by antisocial personality disorder and not fetal alcohol spectrum disorder, as the defense contends. But the surfacing of white supremacy and misogyny in his trial aren’t surprising. Even if they didn’t drive Cruz to act, it’s further proof that hatred is very much alive and young men seem especially prone to subscribing to it.

Cruz is hardly the first mass shooter to espouse such heinous views. The Columbine shooters, for example, referred often to “4-20,” Hitler’s birthday and the day the massacre occurred.

In Buffalo, authorities have said an 18-year-old targeted a grocery store in a Black neighborhood, killing 10 people, because he wanted to prevent Black people from replacing white people. In Charleston, a 21-year-old white supremacist opened fire during Bible study at a historic Black church in 2015, killing nine. In El Paso, the man accused of killing 23 shoppers at a Walmart in 2019 told authorities he targeted Hispanics and reportedly posted a diatribe online railing against immigration. In Pittsburgh, a man is about to go to trial for the 2018 killing of 11 worshipers at a synagogue. His social media history included posts about a conspiracy theory that the Holocaust was a hoax.

Most recently, in California, a 25-year-old and self-declared “incel” — an online community of men who call themselves involuntary celibates and express anger against women — was arrested for violent attacks against women. He posted videos online of himself pepper spraying and harassing them.

Perhaps young, lonely men with mental health issues use women and racial minorities as scapegoats for their own marginalization. Perhaps they have found online a validation of feelings they couldn’t express in real life without rebuke. Regardless, white supremacy and gender-related hatred represent a danger to America. Long are the days when white supremacists met in dingy basements and wore white robes. With easy access to guns, white supremacy can more easily turn from online rants to real acts of violence.

Much responsibility falls on online platforms where anything goes like 8chan, where authorities say the El Paso shooter posted his manifesto. We cannot let Facebook and mainstream social media platforms off the hook for their failure to prevent misinformation. At the same time, when Facebook and others remove hateful content and those who advance them, they are often accused of censorship, mainly by Republicans. Florida lawmakers passed a law that would’ve fined platforms for removing political candidates but a district judge ruled it is unconstitutional. A similar Texas law, however, was upheld and Gov. Ron DeSantis now wants to take the issue to the U.S. Supreme Court.

The Anti-Defamation League has counted 450 murders committed by political extremists in the U.S in the past decade. Most of those crimes were committed by right-wing extremists with nearly half of those by white supremacists. Mass shootings were the main factor behind high murder totals. Another ADL report released this month found Florida has seen a dramatic rise in anti-Semitic incidents — a 50% increase in 2021 compared to the previous year — and hate crimes. Our state leaders have been mum on this issue. Meanwhile, obscure groups like the “White Lives Matter” network feel emboldened to fly Nazi flags over interstate overpasses and publicly display they nefarious beliefs.

Perhaps we will never fully understand what drives mass shooters to commit such heinous acts of violence. But we would be foolish to ignore the increasing appeal that white supremacy and misogyny have to young men. We must wonder how many of them are on the verge of snapping. It only takes them a visit to a gun store for that to happen.