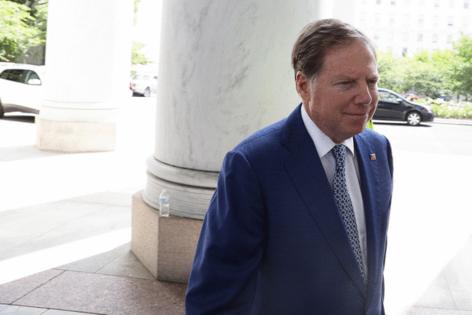 With the recent release of their separate books on Donald Trump, reporters Maggie Haberman (New York Times) and the spousal team of Peter Baker and Susan Glasser (New York Times, New Yorker) are being savaged on social media, especially in the anti-Trump Twitterverse, for allegedly sitting on information against the former guy that they should have reported sooner, and if possible while he was still (dis)serving in office and running for reelection.

Instead of doing their day jobs, the criticism goes, the reporters held back newsy details to increase their book sales.

It's the indictment similarly lodged against other daily journalists who've written books documenting the Trump era. Haberman, especially, is a target now. "Maggie Haberman is more corrupt than Donald Trump," one Twitter critic avows, as if Haberman didn't break more negative news about Trump while he was president than just about anyone. In fact, the one criticism I have of what I've read so far of her book is that much of it seems familiar.

Full disclosure as I defend my fellow journalists: Haberman and Baker are former colleagues, others are friends, and I too wrote a political book during the Trump years, while editing Washington coverage for this newspaper. For much of my career, including at the New York Times, editors discouraged us reporters from getting book contracts, rightly fretting that their employees would come upon bombshells that the employer's subscribers deserved to get, pronto.

That fretting is over. News organizations these days see value in reporters building their own "brands," and they want to be first to publish their reporters' buzzy book excerpts. For reporters to hold back information for a book remains a journalistic pitfall that they and their editors must manage, and that can be difficult to pull off.

Yet details that make it into books rather than into immediate reporting may only be available for that format. Some sources open up to book authors in ways they wouldn't for a daily news reporter. Many agree to talk only because a book is coming out later — say, after an election. Also, sources wager, a book allows for more complete, contextual reportage than a daily news story.

So there are trade-offs. To the good, the historical record on Trump and his presidency, the worst one ever, is richer for these books. They're not fake news, as Trump would have it; they're the antidote to fake news. And they've literally got a longer shelf life than a daily story.

Let's turn now to Trump books that are more objectionable: the ones written by former government officials who waited until they or he were out of office to tell us exactly how bad the former president was, and only then for a price. They witnessed Trump's conduct; journalists must dig for such information after the fact.

It was more than a year after Trump reluctantly left the White House that Defense Secretary Mark Esper, who was fired, confirmed in his book that his ex-boss had considered a coup in the event of a loss, proposed that troops shoot racial-justice protesters, suggested bombing Mexico to hit drug cartels and wanted to court-martial U.S. generals who criticized him.

Public service that's not, despite the kudos Esper and other such authors may collect for their belated tell-alls on the book-shilling circuit. There is no good reason these officials couldn't have told us the chilling specifics in real time, as a true public service. They certainly should have spoken up before Trump sought reelection or, in some cases, before his Senate acquittals in his unprecedented two impeachments.

Former national security adviser John Bolton, for example, might have created enough pressure on Senate Republicans to support Trump's conviction in the first impeachment trial had he told all he knew of Trump's extortion attempt targeting Ukrainian President Volodymyr Zelenskyy. Instead, Bolton revealed his eyewitness evidence in his book months later: He let us into "The Room Where It Happened" only after it was too late.

Likewise, Senate Republicans might have been shamed into convicting Trump after his second impeachment, for inciting the Jan. 6, 2021, insurrection, had former Attorney General William Barr gone public about how he and others repeatedly told Trump that his claims of election fraud were "bull—," even as the president plotted to overturn Biden's electoral votes based on that lie. Yes, it was "One Damn Thing After Another," as Barr titled his book. Too bad he saved the Trump-damning for his book tour this year.

More recently it's Barr and Trump who are belatedly skewered in a new book by Geoffrey Berman, one of the nation's top federal prosecutors until he was fired after investigating Trump allies.

The backstory of Berman's messy dismissal was a bit mysterious at the time, amid the 2020 campaign. There was plenty of speculation, but we had to wait more than two years to read Berman's account of how he'd been "Holding the Line" against Trump and his appointees, including Barr, as they politicized the Justice Department, turning it toward prosecuting the president's enemies and sparing his friends.

Such tomes by government officials, like those by reporters, are essential for the historical record on Trump, yet the gravity of the abuses the officials saw, and the unhinged utterances they heard, demanded exposure at the time, something only they could have provided.

It's possible that Donald Trump's appointees have already set a record for condemnatory tell-alls about any one administration. And yet plenty of the former president's functionaries have yet to be heard from. For those with firsthand information about Trump's conniving to stay in power, here's an alternative to a book deal: Talk under oath to the House committee or Justice Department prosecutors investigating the events surrounding Jan. 6, 2021.