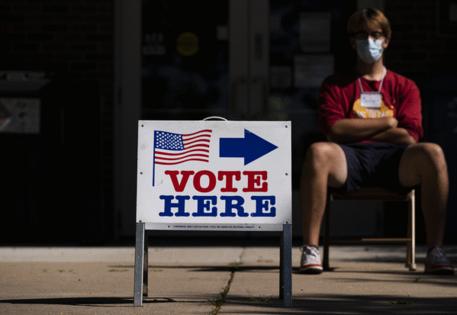 ST. LOUIS — When Barbara Sheinbein, 64, went to vote in the April election her friend drove her to the polls. Her friend went inside the polling location in St. Louis County and told a worker that Sheinbein wanted to use an accessible voting machine because she is blind. She can’t read a printed ballot.

“We have a little issue,” the worker said. One of the scanners had broken down, so they had replaced it with the accessible one. There wasn’t an accessible one for her to use.

Sheinbein declined to have someone read the ballot to hear and mark her choices. She wanted to keep her vote private. Instead, they ended up driving to another location that had a working machine.

Not every person with a disability is able to do that.

Nearly 61 million Americans have a disability. This makes the group the country’s largest minority, but historically they have among the lowest voter participation rates, according to Denise Lieberman, director and general counsel for the Missouri Voter Protection Coalition. The barriers to getting registered and casting a ballot are insurmountable for many.

That percentage improved significantly during the pandemic when many states expanded curbside, absentee and mail-in voting. However, Republican-controlled state legislatures have rolled back access to voting in more than a dozen states since the last election. The new restrictions will disproportionately impact low-income voters, minorities and people with disabilities.

A national expert on voting rights, Lieberman is leading the legal fight against barriers to voting recently enacted by the state legislature. The coalition hotline frequently receives reports from voters who struggle to enter older voting locations that lack fully ADA-compliant entrances. Another common complaint involves places where the accessible equipment is broken or unavailable.

If you have a disability or illness, you are entitled to curbside voting, Lieberman said. Voters don’t have to provide any medical information about a disability. They are entitled to have their polling location permanently moved to one that is accessible, and members in the same household can also vote there, she said.

Sometimes the poll workers are poorly informed about the accommodations that must be present for those with disabilities. Sheinbein recalled another incident from a previous election where the device to hear the ballot was available but the headphones to use it were broken. Since then, she has brought a pair of headphones with her to vote.

Even the process of getting registered can present significant obstacles.

Aimee Robertson, of O’Fallon, Missouri, is the parent of an 18-year-old son with profound hearing loss and other disabilities. She documented their ordeal trying to get him registered to vote earlier this year in a letter to the League of Women Voters. Before the changes in state law going into effect next month, he was able to use his original birth certificate and a bank statement to cast his ballot. State lawmakers have decided that those forms of identification are no longer good enough. Her son does not have a driver’s license. It took Robertson several days and repeated trips to the licensing office to get a state-issued ID. His birth certificate, school ID and bank statement were not enough proof, so they had to order a replacement copy of his Social Security card — in person.

“I consider us to be lucky in that we do live within 10 miles of a licensing office, but if we were more rural, I would have most likely opted to throw in the towel rather than jump through all the hoops to get the identification he now needs to vote,” she wrote. She also questioned why certain documents, like his birth certificate, social security card and proof of residence are good enough to get a valid form of photo identification in order to vote, but these same documents are not good enough to present while voting.

“If we were more rural and lived further from the license place or if my son hadn’t had my help, he would just not be able to vote in November,” she said, adding that they were never offered the “free” state ID.

She had to take two and a half days off work to get his registration completed.

It raises the question of why some lawmakers are so invested in making voting for certain groups so difficult.