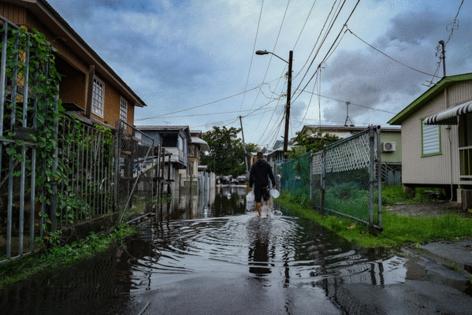 On Sept. 18, nearly five years to the day of Hurricane Maria, the force of Hurricane Fiona and a fragile power grid plunged Puerto Rico into a frightening yet familiar darkness. From low-lying to mountainous regions, flooding and landslides battered vulnerable communities, and with it, resurfaced painful memories of Hurricane Maria.

More than a week after Hurricane Fiona made landfall, approximately 400,000 residences are without electricity. This was not unexpected. Public confidence in Puerto Rico’s power grid is so low that residents braced for a blackout even before this latest disaster.

In 2021, Puerto Rico’s public grid, Puerto Rico Electric Power Authority, was privatized and contracted out to Luma Energy, a U.S-Canadian energy company. Privatization was pitched to the public as the best option for a more reliable service.

Puerto Ricans’ skepticism has since been vindicated. Under Luma, energy prices have soared while delivery has remained subpar. Some families and elderly residents have been forced to choose between paying for their medicine and food, or their electricity bill. Puerto Rico not only has among the highest electrical rates in the United States, but also, at 43%, one of its highest poverty rates. Many public employees, like teachers and emergency medical professionals, are working two or more jobs to pay for basic needs.

Each community across the archipelago faces its own obstacles, but all share the awareness that we cannot rely on a federal and local government that has chronically failed us. In a recent congressional hearing, a Federal Emergency Management Agency Official, Anne Bink, reported that only $40 million out of the $13.2 billion allocated for public utilities, has been disbursed. This shocking shortfall follows FEMA’s own admitted failures in its post-Maria response, such as a lack of critical supplies and effective logistical coordination with the local government.

My 84-year-old grandmother, Eva Fret Pabón, has experienced multiple hurricanes in her lifetime and suffered from government neglect. She lives alone in Vega Baja, a municipality about 45 minutes from the capital city, San Juan. After Hurricane Maria struck on Sept. 20, 2017, she was left without power for over five months and without potable water for three months. Today, she faces the same challenge and is once again without electricity for fans, cooking or light.

Eva was as prepared as she could be for what was initially forecast as a tropical storm. However, shortly before Fiona made landfall, the tropical storm was upgraded to a Category 1 hurricane, and residents scrambled to acquire supplies. This put tremendous pressure on families and elderly residents living below the poverty line.

Facing an ineffective government response, reliable solutions have come in the form of mutual aid centers and community activism. Local infrastructure that developed in response to Hurricane Maria in 2017 enabled Puerto Ricans in the archipelago and in the diaspora to quickly mobilize their own emergency response.

Even so, warm meals are hard to come by. Eva and her neighbors plan and share meals with the few ingredients that they have access to, which includes mostly canned meat and vegetables. When her knees are too sore to walk, friends and family deliver necessary supplies or drive her to medical appointments. Local networks of neighbors and family work collaboratively to address the needs of each person. The effects of housing disparities, COVID-19, natural disasters and economic inequality on mental health is widely overlooked.

Media silence has accentuated the unequal relationship between Puerto Rico and the United States. The destruction of whole communities by these hurricanes is broadcast on televisions nationwide, but there’s inadequate coverage that centers on the hardships these communities face in the aftermath.

In it, Graulau invited residents to speak candidly about their experiences while drawing attention to multiple inequities in Puerto Rico: privatization of public beaches and schools, predatory housing practices, and government corruption. Political and economic disenfranchisement will not stop Boricuas from preserving our culture, language and our very existence. Here, “Solo el pueblo salva al pueblo,” meaning “only the people save the people,” is a rallying cry. And it shouldn’t take one prominent voice — or the suffering of low-income civilians living in darkness — to get Puerto Ricans the help and resources they need after another climate disaster.