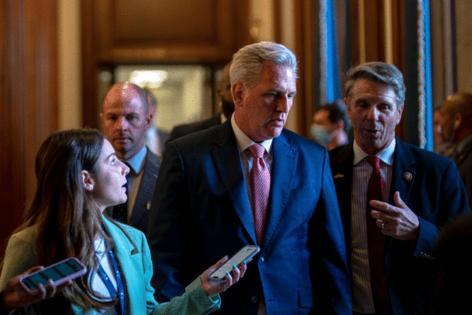 House Minority Leader Kevin McCarthy last month unveiled the Commitment to America, a summary of the agenda for what he hopes will be a new Republican majority in 2023. The policy goals it outlines are a mix of traditional Republican positions (pro-life, pro-gun, pro-military spending) and relatively new priorities, such as promising to “confront Big Tech” and “ensuring that only women can compete in women’s sports.”

Ever since Gingrich’s success, minority parties have hoped that releasing a similar list of campaign promises might grant them a comparable electoral payoff. Congressional Democrats produced a “Six in ‘06” plan before the 2006 midterms, and House Republicans endorsed a “Pledge to America” in 2010. But even though both parties ultimately marched to electoral victory in those years, there isn’t much reason to believe that any of these documents actually helped them do it — or that it’ll be any different this year.

The original Contract with America reflected a sound strategic calculation: By the early 1990s, many Americans had fallen into the habit of voting differently for the president and Congress, often supporting popular Democratic incumbents in Congress even as they preferred Republicans such as Richard Nixon, Ronald Reagan and George H.W. Bush for the presidency.

Gingrich and his allies in the House Republican conference decided that the way to a majority was to nationalize congressional elections as much as possible. They sought to convince citizens to base their vote on their frustrations with Washington as a whole, rather than their warmer feelings toward their local representative.

The Contract with America was part of this nationalization strategy, committing Republican candidates to a common agenda of conservative policy and institutional reform. But there’s no evidence that the plan itself made much of a difference. Only 7% of respondents to a New York Times poll conducted just before the election reported that the contract made them more likely to vote Republican, while 5% claimed that it would make them less likely to support the party, 15% responded that it would make no difference, and 71% admitted that they had never heard of it.

It was the rest of the Republican message that resonated with voters in 1994, communicated through television ads tying individual Democratic candidates to a controversial president, Bill Clinton, and a set of damaging scandals that embarrassed the Democratic leadership in Congress. This aspect of Gingrich’s nationalization strategy, somewhat innovative at the time, quickly became routine in both parties. Every subsequent midterm election has been primarily fought over national issues and figures rather than local concerns, including the Clinton impeachment in 1998, the Iraq War in 2006, the Affordable Care Act in 2010 and the Trump presidency in 2018.

Both sides now routinely encourage voters to focus their attention on ideological policy debates and to treat individual congressional races as proxy battles for control of the federal government. This fall, blaring television ads and eye-catching mailers are urging residents of competitive seats to use their vote to “send Washington a message” about national issues such as inflation or abortion, and to express their rejection of “Joe Biden’s failed policies,” “Mitch McConnell’s extreme views” or vice versa.

And voters are likely to heed these commands. Party-loyal voting has grown significantly in congressional elections since the 1990s, as citizens have become increasingly aware that their vote influences not only which candidate represents their home community but also which party holds national power.

This perpetually nationalized climate means that McCarthy’s Commitment to America isn’t strategically misguided, just redundant. But his plan could ultimately prove useful for a different purpose. The Contract with America might not have actually won Republicans many additional votes in 1994, but its release ultimately allowed Gingrich to persuade journalists, and even some Democrats, that his candidates’ subsequent victories represented a popular endorsement of its provisions. If Republicans win back the majority this year, they can try to claim that the policy manifesto they issued this fall received a mandate from the public — even if, like the contract 28 years ago, most Americans don’t even know it exists.