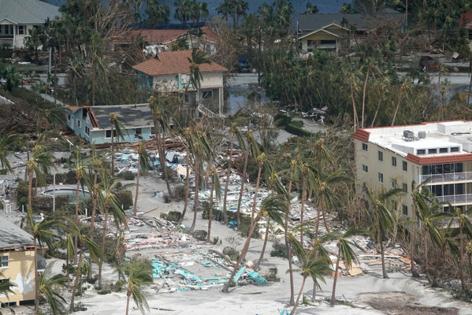 Mammoth Hurricane Ian has broken our hearts and stolen the stuff that paradisaical dreams are made of in our weary Florida.

Deadly Ian has isolated Sanibel and Captiva, severing the only way in and out by land. Once the spot where we exhaled and left troubles behind, the Sanibel Causeway has been chopped into chunks, scattered and washed away as if it had been built with children’s building blocks.

Seeing from afar, the widespread devastation is hard, and the wait to return, even tougher.

The twin barrier islands are home to close to 7,000 beach-loving people who venerate nature. And for South Florida families like mine, that have been visiting religiously since the late 1970s, they’re the setting of unforgettable summer vacation memories.

Sanibel, in particular, is special for the way residents have fought hard to limit density and preserve conservation areas in the face of menacing development.

“It’s ironic that an island that so fiercely protected nature against development would have nature turn on it like this,” laments my friend Rafael Peñalver, who has owned a second home in Sanibel on Sand Castle Road since 1980.

“Catastrophic,” he said. “When things like this happen, one wonders if it will ever be the same.”

Peñalver speaks for so many of us who love Sanibel dearly.

The island is popular with Miamians, both professionals who have condos or homes there, like Peñalver, a Coral Gables lawyer and president of the board of directors of Key West’s historic San Carlos Institute, and blue-collar Cuban families like mine.

My factory-working parents took on extra gigs and saved all year to rent for one precious summer week a bungalow-style house on the cheaper southern end, years later razed to make way for stately mansions.

Then, the go-to became the nearby budget-friendly Colony Inn, which dates to the 1950s.

For my homesick exiled parents, Sanibel’s soft sands and turquoise seas became the prized stand-in for their Varadero in Cuba. The summer my father didn’t enjoy his time on the island, I knew death was knocking on his door.

Peñalver reminds his guests of his rule of thumb: If your neighbor can hear your music, it’s too loud.

“The love I have for that place, what it has meant to me all these years,” reminisced Peñalver, the fate of his house with a golf course-view now unknown. “All the love you put into a house like that … The mesmerizing sunsets I’ve seen from my back yard listening to classical music and the chirping of birds. At night, you see thousands of stars. Lights have to be [installed] downward so we all can see the night sky.”

Sand Castle Road, isn’t that the loveliest of street names?

Perfect for an island that has no traffic lights. Only stop signs, which people actually obey. No big chain stores or eateries, either, if you don’t count the Dairy Queen, there since the 1950s, a family favorite for ice cream runs on hot summer nights.

But now, not seeing the landmark on drone or rescue flight videos is a source of anxiety.

“The anxiety about whether I have a house or not, the not knowing what has happened to the people who serviced my home and live in a trailer park on Periwinkle, right after the Dairy Queen, is terrible,” Peñalver said.

We’ve both seen the viral time-lapse video of Periwinkle Way, the island’s main road, turned into a raging river by Ian’s force. We scour new aerial footage searching for his house, the fragile trailer park and precious landmarks.

Is the historic lighthouse still standing?

It is, a television station reports.

A miracle — or a man-made feat of architecture.

The Dairy Queen survived Charley in 2004, until now the worst hurricane to hit Southwest Florida. Ivan, Jeanne, Wilma and Irma wind-whipped these islands as well.

But this … there are no words. Like Sanibel Mayor Holly Smith said in a moving letter “to Sanibelians and to all those who love this Island,” she, too, is “struggling to find the words to convey my feelings.”

Summer won’t be the same without Dairy Queen.

Silly thing to say, when so much is at stake right now, but this is an ode to a devastated island I know well and love for a myriad of sentimental reasons.

Last June, I was driving my grandchildren to Miami after picking them up in Jacksonville and Orlando for two weeks of summer camp, when, on a whim I got off the Turnpike and proclaimed: “Let’s go to Sanibel!”

It was a quite a mission getting there, driving through the agricultural Okeechobee area. Not a straight shot as I thought — and when I got there, the island was booked solid.

Only pricey Casa Ybel Resort had a one-bedroom oceanfront unit left — and I took it, the $500+ a-night price tag be damned.

Now, I can’t possibly be more grateful that I did, the memories made all the more priceless.

I reflected, when I woke up to the most spectacular sunrise I’d ever seen, that hree generations of my family now love Sanibel.

Then, here comes Ian to possibly ruin summers to come.

This column is also a call for the island’s restoration to take place, as Peñalver puts it, “under the same principles of respect that made Sanibel paradise” — the commitment to keep the island pristine and in its natural state, with low-density living and features that make it the state’s best shelling beach, a pleasurable dining destination, a habitat for wildlife and a canopied haven of biking and beach trails.

Sanibel’s quaintness lies in its distinct mom-and-pop businesses, where you easily strike up a conversation with locals.

Grocery shop at Jerry’s, and say hello on your way in or out to the colorful parrots on the patio. (I wonder where they are tonight, if they flew to safety or if someone took the birds off the island with them).

Eat at funky restaurants named after animals: Lazy Flamingo with its dive bar vibe. The Island Cow, which delights children with a sweet muffin as a starter. The Mucky Duck, the place to greet a glorious sunset, drink in hand, in Captiva, which is smaller and, unfortunately, more packed and overbuilt than Sanibel.

There’s a concern that, in the aftermath of Ian, financial interests will swoop in and try to profit from the islands’ destruction. The decreased property values of shattered houses sitting on large lots are low-hanging fruit for developers.

“More than ever, Sanibel should stay the way it is,” Peñalver argues. “We need to go back and save this place. The island could’ve been developed with multi-story hotels and casinos, but the people who lived there had values about the lasting things in life, the value of nature and the value of wildlife. People had respect for each other.”

He’s sad b,ut hopeful: “We will rebuild. We’re healthy and we have our lives. I’m grateful for 42 years of priceless memories.”

The wildlife would be the last thing Peñalver would enjoy as he shuttered up his home before the storm.

He found a flock of ibis feeding on his lawn in front of the jumping dolphins fountain.

“I had never seen such a concentration,” he said.

With the winds starting to pick up, he drove back to Coral Gables close to 11 p.m. As he left Sand Castle Road, he saw a beautiful wide-eyed gray fox.

“It looked so scared,” he said.