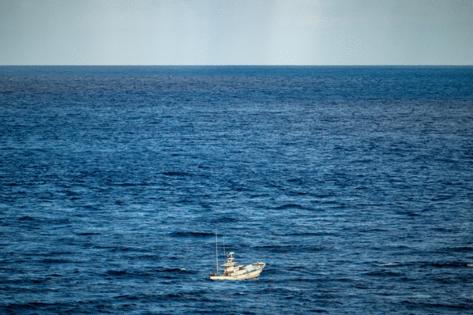 Crimes like this don’t often happen on land. A 10-minute slow-motion slaughter captured by a cellphone camera shows a group of unarmed men at sea, flailing in the water, shot and killed one by one, after which the culprits pose for celebratory selfies. The only thing more shocking than the footage was the government inaction that followed.

The case shows the challenge of prosecuting crimes on the high seas and the reason violence offshore often occurs with impunity. There were at least four ships at the scene that day, but no law required any of the dozens of witnesses to report the killings — and no one did. Authorities learned of the killings only when the video turned up on a cellphone left in a taxi in Fiji in 2014.

It’s still unclear who the victims were or why they were shot. An unknown number of similar killings take place each year — deckhands on the ship from which the video was shot later said they’d witnessed a similar slaughter a week before.

The number of violent killings — and deaths at sea in general — remain extremely hard to assess. The typical estimate has been 32,000 casualties per year, making commercial fishing among the most dangerous professions on the planet. The new estimate is more than 100,000 fatalities per year — more than 300 a day, according to research produced by the FISH Safety Foundation and funded by the Pew Charitable Trusts.

“Reasons for this significant loss of life include the lack of a comprehensive safety legislative framework and coordinated approaches to promoting safety at sea in the fishing sector,” a report by the Food and Agriculture Organization of the United Nations said. But the United Nations, which tracks fatalities by profession, does not indicate how many of these deaths are from avoidable accidents, neglect or violence.

Brutality in distant-water fishing fleets — and the connection to forced labor on these vessels — has been an open secret for a while. A report released in May by the University of Nottingham’s Rights Lab showed, for example, that migrant workers on British fishing ships were systematically overworked and underpaid while more than a third of the workers said they experienced severe physical violence.

In 2020, a team of researchers used the satellite data tracking of about 16,000 fishing ships to estimate how many people were at risk of being subject to forced labor based on criteria defined by the United Nations’ International Labor Organization. Up to a quarter or roughly 100,000 people were at high risk of being victims of forced labor, according to the study published in the journal, PNAS.

Steve Trent, the director of the Environmental Justice Foundation, said that his staff interviewed 116 Indonesian crew members who worked on fishing vessels from China, which has the world’s largest distant-water fishing fleet. Roughly 58% had seen or experienced physical violence, the organization found.

Addressing such violence and other brutal conditions in commercial fishing is difficult in large part because so little data is captured or provided to the public. And since problems are only countered when they are seen and counted, this research shortfall is a major barrier to regulating the industry.

The case of the murders caught on the cellphone was unusual in that the perpetrator and the ship were eventually identified. Trygg Mat Tracking, a Norwegian research firm that focuses on maritime crime, determined the ship was the Taiwanese-flagged Ping Shin 101 by comparing video footage with images in a maritime database. Former deckhands on the Ping Shin were found through Facebook postings and on other social media platforms where they had discussed their time onboard. Interviews with these former deckhands, some of whom said they had witnessed the killings captured in the video, revealed the name of the captain and details of the killings.

Taiwanese officials, presented with the names of the men and ships in 2015 and 2016, said the victims appeared to be part of a failed pirate attack. But maritime security analysts noted that the claim of piracy has been used to justify violence for a range of offenses, real or otherwise. The victims, they said, might have been crew members who had mutinied, thieves caught stealing or simply rival fishermen.

After several years of public and journalistic pressure, the Taiwanese government issued a warrant for the arrest of Wang Feng Yu, the captain of the Ping Shin 101, who ordered the killings. In 2021, he was convicted and sentenced to 26 years in prison.

Such killings will continue to go unchecked without better tracking of offshore violence, more transparency from flag registries and fishing companies, and more effort by governments to prosecute the perpetrators. And that matters because what occurs at sea affects everyone. By some estimates, upwards of 90% of world trade is moved by sea and seafood is a major source of protein for much of the world.

What can be done? Advocates, law enforcement and researchers suggest four steps.

— Report violence. Human rights researchers suggest that shipowners and crews should be legally obligated to report crimes at sea. The resulting data should not be held privately by insurance companies or flag registries for ships, but be made available to the public.

— Regulate registries. Ships on the high seas obey the rules of the countries whose flags they fly. Flags of convenience often provide cover for illegal behavior, including violence against or between crew members. Seafood companies should require that fishing ships supplying them only fly the flags with strictest accountability and transparency standards.

— Ban transshipment. Forced labor and violent crime is more common on fishing ships that stay at sea longer, something that is enabled by transshipment, in which supply vessels carry catch back to shore so that fishing boats can keep working. Forcing ships back to shore sooner helps limit forced or trafficked labor, and enables companies and governments to spot-check for violence or abysmal working conditions.

There are reasons for hope. Satellites make it tougher for ships to go dark and hide their crimes. Cellphones make it easier for crew members to document violence. A growing use of open-source footage by journalists has bolstered public awareness of human rights and labor abuses offshore. Now, it’s really up to companies and governments to do their part.