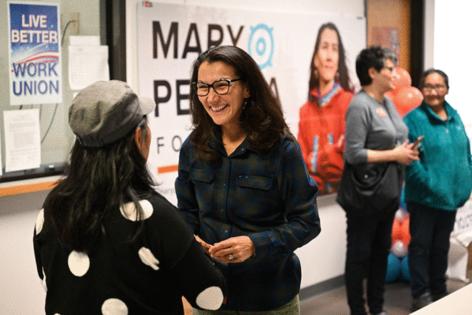 RCV is a voting method grounded in common sense with a time-proven track record. It empowers individual voters to send a clearer message about whom they want to represent them. It helps elevate the candidates who are genuinely most popular with the public. Study after study shows RCV does not confuse voters, who find it easy to use.

In the system we are used to, sometimes called “first past the post,” you vote for one candidate, and whoever gets the most votes wins. That works fine most of the time. But it can mean a not-very-popular candidate who garners, say, 35 percent of the vote can slip through against a crowded field of opponents.

There are other problems with the traditional election method, such as the opening it can create for “spoiler” candidates. Further, first-past-the-post elections tend to pressure supporters of less popular candidates to refrain from voting for the person they truly believe is best and instead support one of the front-runners so as not to “throw away” their vote.

Sure, you could address some of these problems by holding a runoff, but those are a big hassle: You have to reserve the polling places again and call back the volunteers, voters need to make time, the candidates need to resume campaigning, and so on. After all the fuss, turnout in a runoff often plunges. The bottom line is that most places don’t use runoffs and instead put up with the problems of first-past-the-post.

Instant runoff voting, as the simplest form of RCV is called, helps fix these problems with minimal delay and expense. Here’s how it works:

Like now, you start by marking your first choice on the ballot. After that, you’re free to rank the other candidates as your second choice, third choice and so on — as many ranks as there are candidates. Your lower choices never count against your higher: Only if your first choice, Ava, gets knocked out of contention will your vote for her get moved over to your second choice, Ben.

New York City voters gladly embraced RCV in its first-time run, with majorities of all demographic groups using the option to rank multiple candidates. Voters said they found it easy to use, and they wanted the city to go on using it in future elections.

In the Democratic primary, which in New York is tantamount to a general election, RCV encouraged inclusive campaigning: Many candidates actively pitched for secondary preferences from voters whose first choice was a rival. Negative personal swipes were less evident — why risk alienating a rival camp when you might need them to rank you second or third?

In the end, Eric Adams — seen as a moderate by Gotham standards — prevailed narrowly and now serves as mayor.

In the recent Alaska House special election, Mary Peltola, a Democrat with strong crossover appeal, prevailed in a three-way contest over Republicans Sarah Palin and Nick Begich. Peltola would have won outright without ranking and would probably have beaten former GOP vice presidential candidate Palin in a straight head-to-head contest, too.

For Palin, the best hope would have been to ask Begich voters for their second-choice votes. Instead, she denounced the new setup and asked voters not to rank candidates at all. That sealed her fate. (Incidentally, Alaska and New York City were slow to tabulate votes, but for distinctive local reasons. The method is consistent with fast tabulation.)

Because cities like San Francisco and Minneapolis use it, Americans sometimes peg RCV as a progressive notion. But right-leaning parties have done quite well in Australia and Ireland, both of which have used RCV for a century (and are among the world’s most stable democracies). In August, Canada’s Conservatives used ranked-choice to pick Pierre Poilievre to fight the next election against Justin Trudeau’s Liberal Party.

In Virginia, the GOP scored a standout win after using RCV to pick Glenn Youngkin as its candidate for governor in 2021. Had Georgia used RCV rather than a standard runoff in its 2020 Senate elections, it is likely that GOP incumbent David Perdue would have garnered enough Libertarian second choices to prevail, and the Senate would be Republican-controlled today.

Existing establishments in both political parties tend to lead the opposition to RCV; some have suggested trying it out first for nonpartisan races and party primaries. But it’s wrong to hold a good idea down. RCV deserves a wider tryout.

Walter Olson is a senior fellow at the Cato Institute. He wrote this for InsideSources.com.

In the spring of 2019, when Joe Biden was just a battle-scarred former vice president, Barack Obama greeted his newly announced presidential campaign by praising his own selection of Biden as “one of the best decisions ...Read More

As a recession looms on the horizon, many people understandably are worried about their finances and job security. While these concerns are not unfounded, constant worry and stress about things that might go wrong take a ...Read More

On Monday, the Supreme Court will hear oral arguments in a case that threatens to open the door widely to businesses being allowed to violate anti-discrimination laws. If the court rules that the First Amendment protects ...Read More

Robert Kagan puts the term to good use in his 2018 book “The Jungle ...Read More

After more than a decade of U.S. policy focused on preventing Iran from acquiring nuclear weapons, arms negotiations have been shoved off center stage.

The long-running dispute over nuclear weapons has been displaced by a...Read More