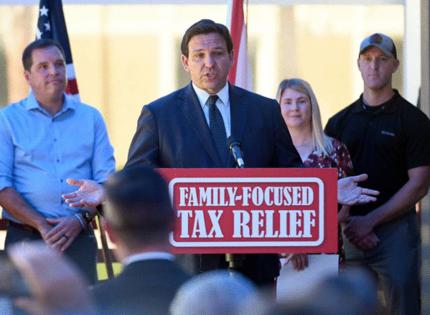 It’s becoming increasingly clear that Florida Gov. Ron DeSantis will have to answer for the dubious legality of his cruel stunt that dropped two state-funded planeloads of migrants on the Massachusetts resort community of Martha’s Vineyard. At the very least, he appears to have violated the boundaries of the state budgetary provision that allowed him to spend money on this travesty in the first place. But the real question is whether actual crimes were committed — including, potentially, human trafficking or kidnapping of the 48 vulnerable, impoverished souls who became pawns in the governor’s game.

They had done nothing wrong and all available evidence suggests they were in this country legally. To protect its claim to be the world’s beacon of liberty and virtue, the United States owes them justice.

That means DeSantis and other state (and potentially federal) officials must be held accountable, to the full extent of the law. We believe the best way to accomplish this is through the auspices of a federal grand jury, and call on the U.S. Justice Department to pursue that course of action quickly and with vigor. Other groups agitating for an investigation should direct their resources toward that coordinated quest for the truth.

The alternative could be chaos — which will only benefit the governor and sow confusion among voters, who in just six weeks will be delivering their own verdict on DeSantis’ political future.

We certainly appreciate the outrage and disgust engendered by the governor’s latest abuse of his power to strike against his perceived enemies — magnified by the fact that this particular group of “enemies” had the legal right to be in the United States. Official records and reporting across multiple outlets suggests that most, if not all, of the migrant families and adults on the Martha’s Vineyard flight were seeking asylum from the meltdown wracking Venezuela — people who “have led lives inflicted by violence, instability, insecurity, and abuse of trust by corrupt government officials that most Americans could hardly conceive of,” according to a lawsuit filed this week on their behalf. As such, they had the right to live and work in the United States while they awaited the hearings that will determine their final status.

How ironic, then, that they fell victim once again to a breathtaking abuse of their autonomy and dignity as human beings, reduced to the status of political playthings. That lawsuit, filed in Massachusetts, describes a scheme in which operatives trolled outside shelters “pretending to be good Samaritans,” offering gift cards and promising help with housing, jobs and other needs in Boston while they awaited their official hearings. DeSantis has insisted the migrants were not tricked — and that they knew they were headed to Martha’s Vineyard. So far, nobody who doesn’t work for him has stepped forward to back him up.

One thing, however, has not been disputed: When they arrived, they were abandoned. None of the promised help was there to greet them until the people of Martha’s Vineyard leaped into action.

That’s bad news for the governor and his potential liability, and for the Florida taxpayers who were swindled into footing the bill for this vicious boondoggle with the full support of legislative leaders.

Along with the lawsuit, officials across the nation — including Florida House Democrats, a Texas sheriff and the governor of California, are calling for investigations. News outlets (including the Orlando Sentinel) are vigorously digging into documents and chasing money trails.

We appreciate the indignation. But we also see a very real potential that pursuing this case on multiple fronts could, at best, be duplicative and costly. At worst, it could offer DeSantis and his defenders multiple opportunities to create confusion about what really happened.

It makes far more sense to coordinate all official investigative efforts through the Justice Department — which should get moving now, and be as transparent about the information it uncovers. That shouldn’t cloud the media’s pursuit for the truth, however. Florida voters deserve as much truth as possible before they vote on whether DeSantis should have a second term, and mail ballots go out in just a few weeks.

Already, there’s a chill in the air.

When DeSantis campaigned with Kansas Republicans last weekend and talked about the flights, he got a standing ovation. But no such standing ovations took place in Florida. Instead, we’re hearing an eerie silence from Republicans who, for once, can see what we all see: DeSantis’s stunt was cruel, inhumane, possibly illegal — and definitely politically dumb. Where’s your ringing endorsement of DeSantis’s actions, Sen. Rick Scott? Sen. Marco Rubio? Members of Congress? GOP legislators? Republican candidates?

Meanwhile, The Miami Herald has documented a third flight that DeSantis’ people are now claiming designed to “punk” the media. Really, governor? That’s a valid use of state funding?

Even more important: Is it the truth? We know now is that, per the Herald, migrants were gathered for that flight, and then turned away. The flight left with no cargo.

That’s a shocking waste of state dollars. Florida leaders know that the money authorized by the Legislature was clearly targeted toward the relocation of undocumented migrants — not legal asylum-seekers. And that the funds were only authorized to be spent in Florida, not Texas.

But we also believe they understand, finally and when it’s almost too late, that this despicable fiasco is not about immigration, which everyone agrees is a brewing crisis. It’s about a governor gone renegade and — perhaps, finally, having gone too far.

Florida’s governor has brought shame upon his state. The only path to redemption lies in a rapid and vigorous pursuit of the truth, in all its ugly reality.

For all the legitimate concerns about privacy loss, the spread of misinformation and the like, one thing mass global access to the internet has done is made it ever harder for oppressive regimes to keep things under wraps....Read More